What exactly is a “Fantasy Slam”? “Slams” in general are a way for anglers to mark the accomplishment of catching an impressive variety of species, typically in a single day. The billfish slams represent catching 3 (Grand Slam), 4 (Super Grand Slam), and 5 species of billfish in one day. At 5 unique billfish species, the Fantasy Slam is by far the most prestigious. In fact, until this week, it has never been accomplished from the white marlin capital of the world, Ocean City, MD. It may never have been done on the entire east coast! 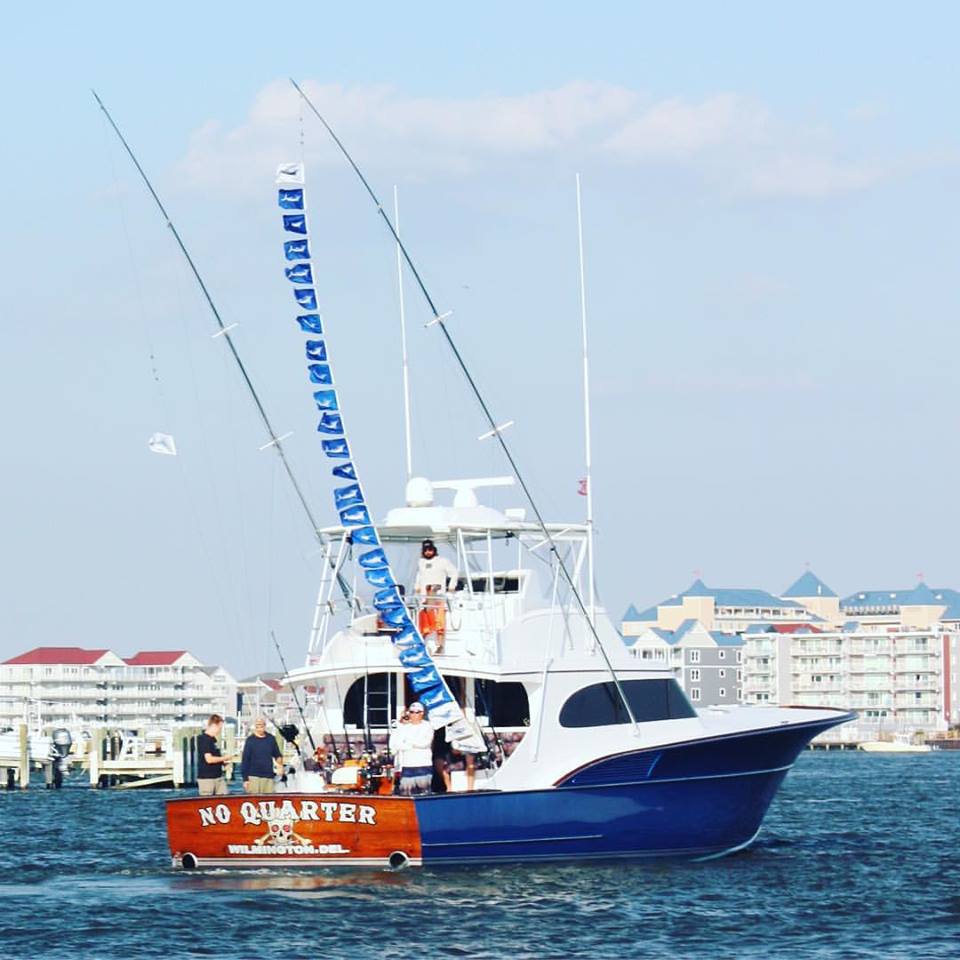 Capt. Kyle Peet, from No Quarter Sportfishing, and his mate Erik Mateer accomplished this impressive feat on an overnight trip from Tuesday 9/13 to Wednesday 9/14. Fin & Field had the chance to talk to Kyle shortly after accomplishing his Fantasy Slam. Maybe the magnitude of his accomplishment hadn’t sunk in yet, Kyle said “it was just another day of fishing”. We also talked to Kyle’s parents. His dad Mike loves talking about Kyle’s lifelong passion for fishing and said that “while the Fantasy Slam is an awesome feat, the trophy sized swordfish alone as incredible. It might be the largest recreational swordfish caught out of Ocean City!” Unfortunately he was working but, not surprisingly, admitted that “I wish I could have been on the boat.” Mike also gave a shout out to the captains that have mentored Kyle along the way including Capt. Butch Davis (the previous captain of the No Quarter) and Capt. Joe Drosey of Rhonda’s Osprey. Kyle’s mom Karen was also beaming about her son. “I am so proud of Kyle” she said, and “I knew that if anyone could do it, then Kyle would!”

For those that want to know the whole story, here it is!

On Monday, Kyle was checking the fish reports and the boats fishing in the Norfolk Canyon area were putting up impressive numbers. Kyle was skeptical of the fish reports at first, but after talking to a few friends out of Virginia he realized he had to make the 90 mile run to those fishing grounds. Kyle, his mate, and a film crew (who were already scheduled to come out as luck would have it) left Tuesday morning for the fishing grounds. After a last minute scramble to get as much bait as possible they spent 4 hours cruising to the zone. On the way Kyle and Erik talked about trying to get a Grand Slam and then trying for a swordfish so they could make it a Super Grand Slam.

They immediately got into the white marlin bite. To say the white marlin were on the chew is an understatement. At one point they had a triple header, and later in the afternoon they had at least 50 bites in a 3 hour stretch. At times on Tuesday Kyle said “you would get bit as your bait hit the water”. About 3:30pm on Tuesday they got a blind bite. As soon as Kyle saw that is was a 200lb blue marlin he backed down on the fish hard. Knowing that the blue would be one of they keys to a slam he didn’t want this opportunity to pass him by. After releasing the blue everyone was in a great mood. They were hooking white marlin left and right but when Kyle saw a freshly hooked fish jump, and it was a sailfish, he knew his Grand Slam was on the line. He backed up right through the dredges, not caring about anything but landing that fish. It all worked out and they had a slam on the books.

Around 6pm, after hooking and releasing more white marlin, they got another blind strike. Kyle thought it was another small blue marlin. When they got it to the boat Kyle realized he had just upgraded his Grand Slam to a Super Grand Slam. Kyle was looking at a long bill spearfish. Everyone was so excited the rest of the day that the hot fishing was just gravy. From 6pm until sunset they went 11 for 20 on white marlin and marked so much bait that “you could probably walk across the top of it” according to Kyle. After catching a variety of fresh bait and cooking dinner, everyone except Kyle and Erik went to bed. Kyle and Erik were starting to dream about a Fantasy Slam while soaking squid and mackerel down deep for swordfish. 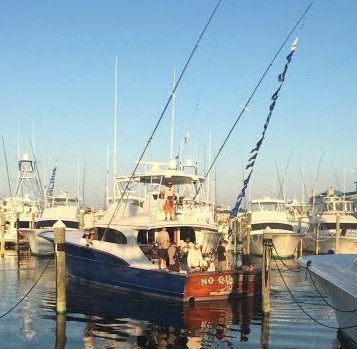 They got bit hard at 11:45, and it took a few minutes to figure out if the bait was getting harassed by a shark. But after some blistering runs Kyle knew it was the right kind. They battled the swordfish in an epic tug-of-war for 5 hours. Kyle remembers fighting hard to gain a few yards at a time and then watching over and over as the swordfish would rip off half the line on the spool in an instant. As the fish came to the boat after nearly 5 hours, Erik yelled “thats the biggest swordfish I’ve ever seen!” Once they gaffed the fish, Kyle came off the bridge and grabbed another gaff. As they were trying to wrestle the swordfish into the boat someone yelled “shark”. Kyle saw a huge hungry mako that wanted nothing more than to snatch that swordfish. Kyle and his crew wrestled to get the swordfish in the boat as fast as possible. At the last second the mako took a basketball sized bite out of the tail. But that was it and the nearly 400 lb swordfish was on the deck. Fantasy Slam complete!!! But Kyle wasn’t done yet.

The Mako kept circling the boat, optimistic that it would be rewarded with more fish. After multiple attempts to hook the fish, one of the other mates grabbed the flying gaff and made a perfect shot. The gaffed shark was ultimately subdued and brought into the boat just as the sun was coming up. They lashed the 247 lb mako to the transom and in true No Quarter style Kyle said “the white marlin are still biting, lets keep fishing!” From sunrise until about 11am they caught another 8 white marlin and one more long bill spear for good measure.

While this epic overnight trip is still sinking in for Kyle and his crew, everyone at Fin & Field is excited to congratulate them on their impressive Fantasy Slam! The legendary nature of scoring a Fantasy Slam out of Ocean City wont be forgotten any time soon. Kyle’s Fantasy Slam and unbelievable day on the water is reminiscent of they types of adventures and outdoor feats that Hemingway made famous. If you want to fish with Captain Kyle Peet, he will be running charters in Ocean City through October. Check out Kyle on the No Quarter and the other impressive captains in Ocean City, MD on the Ocean City Destination page.

Written By
Staff Writer
More from Staff Writer
Ask most bowhunters how many steps are involved in aiming and they’ll...
Read More