The Quest for the Crest is nearing the finish line and the competitors are one step closer to the burgundy jacket now that the 2017 Sailfish Challenge is in the books. The 2017 Sailfish Challenge wrapped up on February 26th, 64 teams competed for $530,000 in prize money and, of course, to earn more points for the Quest leaderboard.  The Challenge is the 3rd of 4 legs in the Quest for the Crest Sailfish Series and one of the most popular sailfish tournaments in the country. The Sailfish Challenge uses a unique 3-inlet format that enables teams to cover a large boundary area during the competition. Boats can return and submit their catch records to one of three inlets from Miami to West Palm Beach.

The large boundary area means teams have some big decisions to make. This year, Miami was looking like the hot area to fish, but the day before the tournament the conditions changed dramatically and a lot of boats moved north to find better sailfishing conditions. One of the boats that moved north was Miss Britt, led by Captain Ray Rosher. Rosher is a renowned charter boat captain out of Miami. Rosher’s decision to move north to Hillsboro Inlet proved successful, successful enough to take top honors in the Sailfish Challenge. By noon on Day 1, Miss Britt had already released 11 sailfish between Lake Worth Pier and Palm Beach Inlet and won the early bite jackpot for the day. They released two more fish in the afternoon to win the daily with 13 releases; a whopping six more fish than the next closest team. Day 2 was all gravy for Miss Brit as their Day 1 total would have been enough to take 1st place for the whole tournament. Instead they fished hard on day 2 and added three more sailfish to finish with a tournament total of 16. They took home a paycheck for $174,310 and swept the Top Team, Master Angler, Top Male, and Top Female categories. 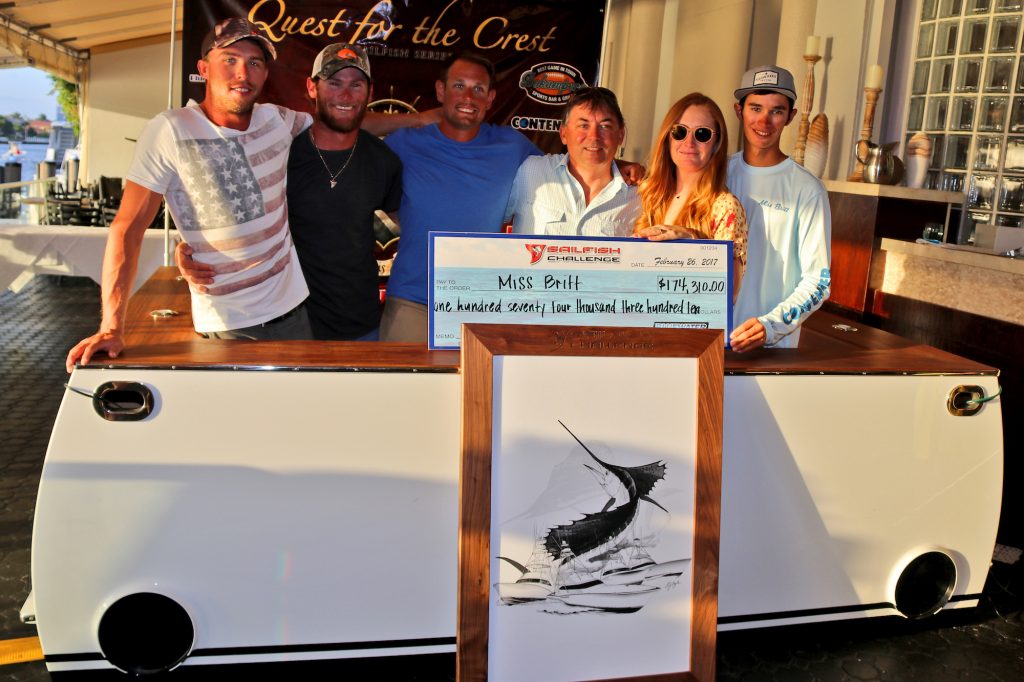 Stephanie Choate on the Miss Britt had nine of the 16 releases and earned Top Female as well as the Master Angler trophy for the top overall angler in the tournament. If you are paying attention you will notice that Stephanie has actually won the top female angler category in all three legs of the Quest for the Crest series this year. Stephanie heads to the Final Sail in Key West hoping to become the first angler ever to sweep a category across the entire series! Her teammate Matt Bierly won the Top Male Angler category in the tournament with four releases. Matthew Yee was awarded the Top Junior Angler title on board Reel Captivating with two releases.

Miss Britt was solidly in the lead butt he rest of the leaderboard was hotly contested. With only two hours to go on the final day, two teams were tied with seven and even more teams had six releases. Team Advanced Roofing/Sailsmen caught a double around 2:15pm that pushed them into 2nd with eight releases. Team Crescendo, who won Leg 1, released a fish with thirty minutes to go and claimed 3rd place, also with eight releases. Teams Sandman, Kimbuktu and Goin’ Raptor rounded out the leader board with seven releases each in 4th through 6th place. The 5th place finish for Sandman was good enough to maintain their lead in the chase for the champions jacket but Advanced Roofing/Sailsmen, Miss Britt Contender, Contender One and De-Bait-Able are hot on their heels. To win the Quest for the Crest will take a strong finish from any of these teams at the Final Sail in Key West on April 25-30!

The grand finale of the Quest for the Crest, Final Sail, takes place April 25th – 30th in sunny Key West, FL at the Margaritaville Resort & Marina where a world champion will be crowned. To register for this event visit www.finalsail.com