The first leg of the “masters of fishing” has just wrapped up in West Palm Beach. In their endeavor to win the jacket and capture the title of the best sailfishing team, 47 boats competed and released 218 sailfish. As you may recall from our kick-off article that introduced this tournament series, Operation Sailfish has a patriotic theme. The focal point of the theme is on the “Take a Hero Fishing Day”. The day before the start of the tournament teams had the opportunity to take a veteran or active duty member of the armed services out for a day of fishing. Trophies were awarded for the top team and top military angler participating in the “Take a Hero Fishing Day”. The top team was Crescendo who caught and released 6 sailfish in what turned out to be a good indication of what was to come. Team BAR South, who won Operation Sailfish in 2015, took service member Charlamain Caycedo out fishing and she managed two sailfish releases and won top military angler.

On Day 1, with $680,000 on the line, 47 boats ventured out into classic sailfish conditions with high hopes. As they day entered its last few hours the Sandman, Blue Moon, and Advanced Roofing/Sailsmen were in a 3 way tie with 4 releases each. In the final hour Advanced Roofing/Sailsmen managed to release two more fish and the $82,530 daily jackpot.  In second place for Day 1 was Sandman earning $40,770.

The weather deteriorated on Day 2 and captains and teams battled strong winds and squalls. Despite the conditions Lion’s Den made quick work of 5 releases before noon as well as a 39.6 pound cobia that won the heaviest meat fish category. They ended up winning $38,100 for 8th place in the sailfish tournament and 1st place in the meat fish division.

After the three way tie on Day 1, Day 2 was even closer. In the final hours there was a 4 way tie between teams Crescendo, Contender One, Sandman and Weez in the Keys (Crescendo was leading on time).  Two minutes before lines out Crescendo radioed in that they had hooked a fresh one.  They successfully leadered and released the fish to convincingly win first place in Leg 1 of the Quest for the Crest Sailfish Series. Captain Skip Dana and his crew fished on a center console and one of the smaller boats in the tournament but they didn’t let that hold them back.  They won a set of engraved dog tags and a check for $239,280!  Contender One took home 2nd (same as they did last year) and a check for $67,470. Rounding out third place was Sandman who took home $61,850. Team Seraphim, past winners of the Sailfish 400, had seven releases and a second place daily that was good for $45,770. 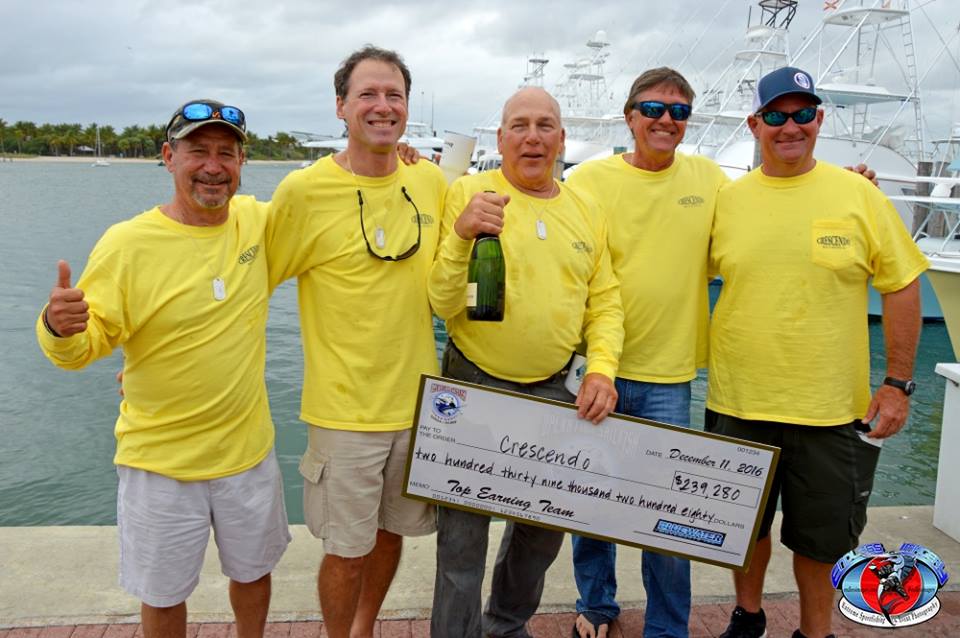 The Master Angler award went to John “J” Walls fishing on the Finster with 5 releases. Stephanie Choate fishing on the Miss Britt won Top Lady Angler with five releases as well. Top Junior Angler went to Matthew Yee with one release on the Reel Captivating.

The next leg, leg 2 of 4, is the Sailfish 400 taking place on January 11th – 15th, 2017 in Miami. To see the complete results and get more information on registering for the remaining tournaments, visit www.questforthecrest.com.

Written By
Staff Writer
More from Staff Writer
Close Call: A Bush-Plane Crashes in Alaska. We had only a brief...
Read More