The Quest for the Crest is a 4 leg series that brings together a high caliber of teams, top shelf events, and a purse of around $3M. 5 years running, it continues to build steam as a premier tournament series off the southeast coast of Florida. The tournaments in the series offer a 100% release format for sailfish and the total number of releases determine the winner for each individual tournament. While the estimated 3 million dollar purse attracts teams from near and far, all of the competitors have their sights set on something much bigger than the the extra large cash payouts in the Quest for the Crest Series. 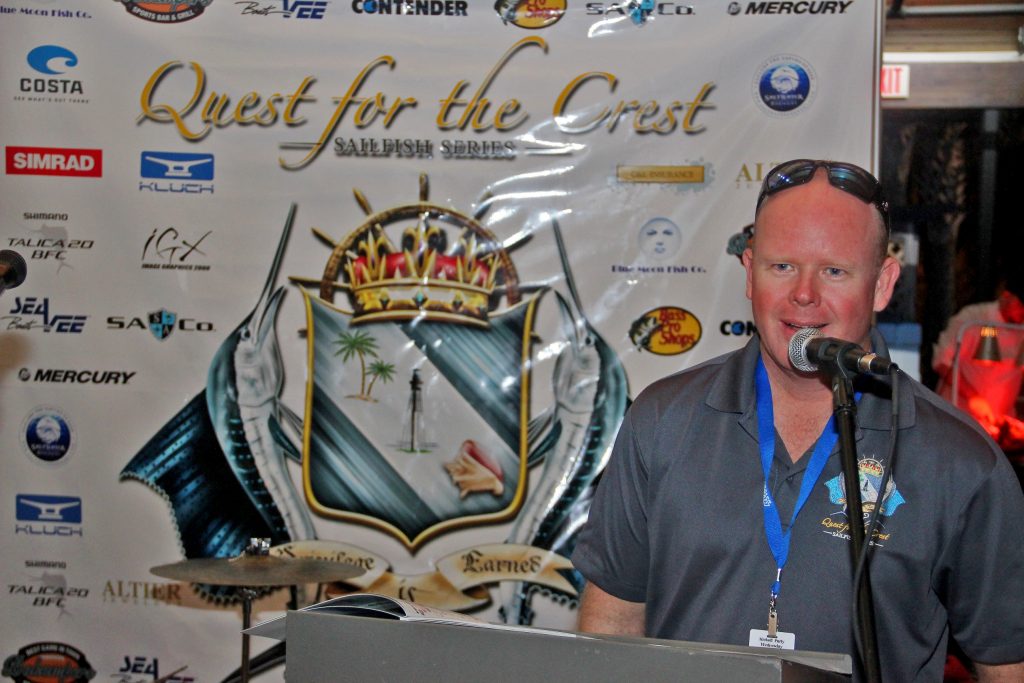 “They’re all chasing the burgundy jacket and the title of #1 in the world,” said Jamie Bunn, executive director of the series. The crest emblem for the series resides on the breast of the jacket. It symbolizes success at the highest level in the sport of competitive sailfish fishing.  “It’s a Mount Everest achievement in our sport,” said Bunn. “The team that is privileged enough to claim this title and put on the jacket at the end of the season joins an elite fraternity of fishermen that go down in history as the best the sport has to offer.”  The scoring system for the jacket awards points based on where a team finishes in each tournament, with the top 30 positions receiving a score in each event. To win the jacket teams must perform at a high level and do it with consistency across all 4 events in the series. Teams receive 31 points for first place, 29 for second, 28 for 3rd and so on in each tournament.

Congratulations to team UTOPIA, the 2015-2016 Quest for the Crest winners. Over 4 tournaments they accumulated 89 points with finishes in 18th, 9th, 6th, and 2nd place. 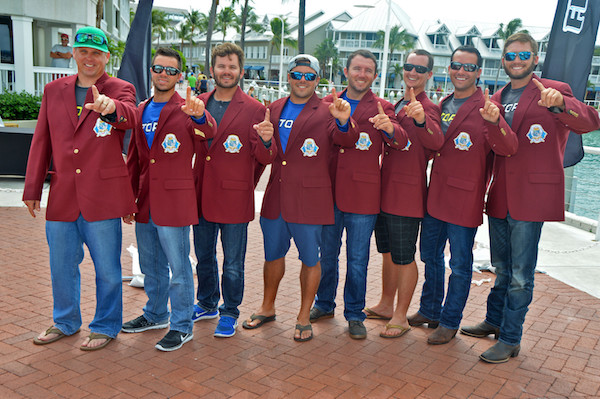 The first leg, Operation Sailfish, takes place December 7-11 in West Palm Beach, Florida at Sailfish Resort and Marina. Each leg has a theme and Operation Sailfish’s patriotic theme is one of the most apparent across the tournament. Each leg also benefits a charity, Operation Sailfish raises money to Operation Homefront, a non-profit organization focused on providing a variety of services and support to military families in need. There is a Take a Hero Fishing day that takes place on a pre-fishing day for teams in the tournament. Boats sign up to take out a Wounded Warrior or other service men and women. There is a trophy for the top team and top angler. It provides a great opportunity for the fishing community to treat our military heroes to a fun day on the water and thank them for their tremendous service to our country. A presentation of the colors and the singing of the national anthem serve as the opening ceremony for Operation Sailfish.

The next leg is the Sailfish 400 from January 11th through 15th in Miami at the DoubleTree Grand by Hilton. With ties to Homestead Miami Speedway and Nascar, teams battle to see who will fly the checkered flag at the end of the tournament each year. The Sailfish 400 also benefits a local charity called Driving for a Cause. With the support of Homestead Miami Speedway, Driving for a Cause uses the popularity of motor sports to promote its mission of helping South Florida youth and education programs.

The 3rd leg is the most popular sailfish tournament in the country. The Sailfish Challenge takes place February 22-26. Although its home base is in Ft. Lauderdale, boats in the Sailfish Challenge can fish out of Government Cut in Miami, Hillsboro Inlet in Pompano Beach, or Lake Worth Inlet in West Palm Beach. On average, around 80 boats compete in the tournament each year. Its reputation for great parties has undoubtedly contributed to the title as the largest sailfish tournament in the country. There is a kick off party at Bokamper’s Sports Bar & Grill in Ft. Lauderdale and the awards ceremony is at the Blue Moon Fish Company, a 5 star restaurant on the water in Ft. Lauderdale as well. At 13 years and counting the Sailfish Challenge is also the longest running event in the Quest series.

The final leg and the ‘grand finale’ of the Quest for the Crest is Final Sail. Key West, FL and the Westin Key West Resort & Marina play host to the Final Sail on April 25-30th. This is the only 3 day tournament of the series, all the other events are 2 days of fishing. In addition to the fierce competition, Final Sail is famous for its parties, including a pub crawl on Duval Street on the eve of a lay day from fishing during the tournament. This is by far the most attractive stop of the series and a perfect location for the week long celebration that marks the culmination of the Quest for the Crest.

Most teams fish all 4 events in the series to have a shot at the jacket. But plenty of teams will fish 1, 2, or 3 events depending what their schedules allow. The Sailfish Challenge for example is heavily attended by teams that are not fishing all of the other events. So don’t let scheduling conflicts keep you from enjoying at least some of these great events. The series is also a great place to learn new techniques. Winning teams will usually employ a variety of fishing techniques from kite fishing to sight fishing. If you need help getting up to speed on these techniques the tournament organizers are happy to provide you with amazing resources and even help you fill out your fishing teams and crews with access to freelance crew members that are some of the best in the business! Need someone to take care of catching your bait? Not a problem. They can make it happen. Have the funds, but don’t have the boat? Not a problem. Contact Bluewater Movements to see how they can help make your tournament experience with them turn key from start to finish. 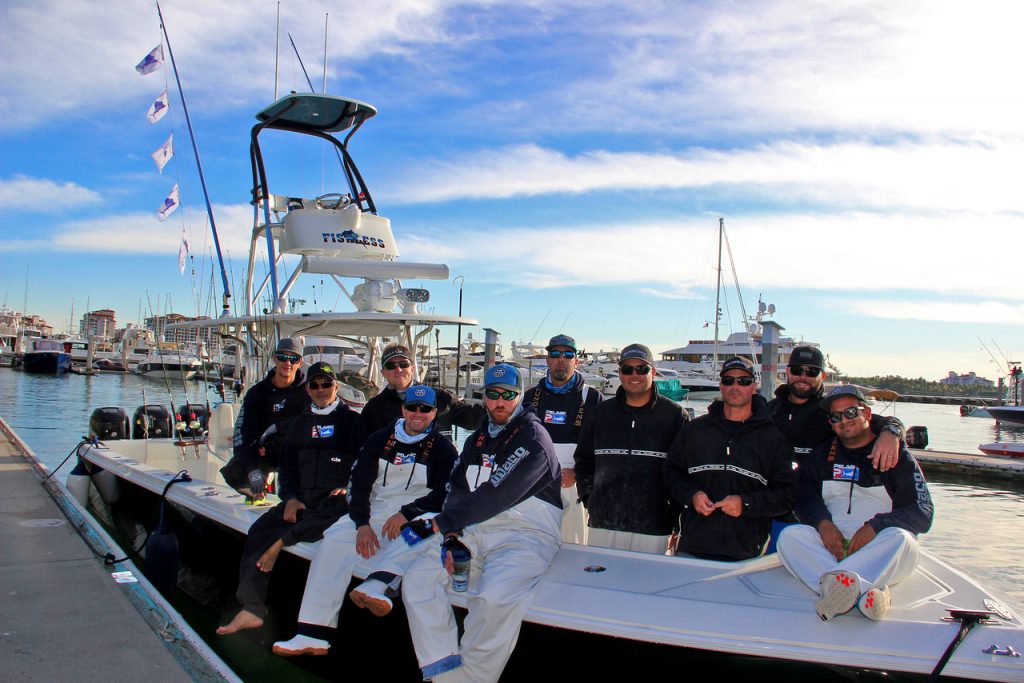 The basic entry fee for Leg 1, 2, and 4 is just $3750 and for Leg 3, the Sailfish Challenge, the basic entry is only $850. The basic entry fee provides access to a tremendous cash purse in each tournament along with a boatload of hospitality benefits. Of course there are optional categories for daily jackpots, meat fish, and a rollover jackpot called the Release Round Up that will be starting out this year with $80,000 already in the pot. The Release Round Up consists of 4 rounds of fishing (each round is a half day of fishing). At the start of the round tournament organizers draw a number out of a hat between 1-6. The number drawn determines the minimum number of sailfish releases a team must have in the round in order to advance to the next round. Drawn numbers can only be used once. The boat that advances through all 4 rounds and has the most releases in the final round will win the jackpot. There was no winner last year so the jackpot has rolled over and is expected to top $100k in the first tournament in December.

If you can’t fish, you can keep up with the action by checking out the ‘live scoring’ online at the Quest website for each tournament during the competition days or tune into Wild Billz, a TV show that follows 3 high profile teams on their journey to win the jacket and the title of #1 in the world. You can also follow Fin & Field on Facebook for tournament updates.

Written By
Staff Writer
More from Staff Writer
A survey of New England’s freshwater ecosystems prior to the 17th century...
Read More

0 replies on “Quest for the Crest: The Masters of Fishing”