All good things must come to an end. With every end there is a new beginning.  Those words couldn’t ring more true than for what happened while I visited the Douglaston Salmon Run (DSR) in mid-October this year. Typically the king and coho salmon run lasts through the end of October. But because of high water levels at the end of summer, the salmon run kicked off early this year. The run was larger than in years passed and had everyone flocking to Pulaski, NY as fast as they could.

By the time I reached the DSR, that beautiful and private 2.5 mile stretch that begins the Salmon River from Lake Ontario, the salmon run had slowed. We spent our first day in our usual honey hole, a stretch of rapids between Joss Hole and Spring Hole affectionately called Snaggletooth Run. I prefer this little stretch because it’s less crowded, relatively shallow and allows for sight fishing. There also happens to be an island in the middle of the river that serves as home base for the day, a place to store gear, take a break and even have some lunch.

As the morning wore on we began to see kings moving up to Joss Hole in pods of two to three fish. When we were lucky, they would move up the rapids and take a break in a seam or pocket along our stretch. When we weren’t so lucky they would blow right past us to the security and depth of Joss Hole. I hooked up to two decent size kings by the time I broke for lunch, but wasn’t able to bring either to hand. By the time I finished my lunch we pretty much had the entire stretch of river to ourselves. Things started to pick up as the afternoon sun began to make its way lower in the autumn sky. I hooked up with a coho that took me into my backing before I could realize what was going on. No sooner did I start to fight him than he broke my line off on a rock. I managed to hook-up to one more king before we headed back to camp for the night and it again managed to spit the hook as I struggled to bring him in. Things got even more interesting as darkness encroached upon us. We started to notice what looked like steelhead making their way up river. My friend, Dan, hooked into a nice brown trout but was foiled when my line tangled with his. On his very next cast he landed a beautiful steelhead that promptly leap out of the water two feet away from me and shot the hook out of its mouth with the shake of its head. Despite the lack of bringing a fish to hand I considered our first day on the river a smashing success. I had seen so many fish, managed to hook into a few and left the river feeling much better about our prospects for the next day. 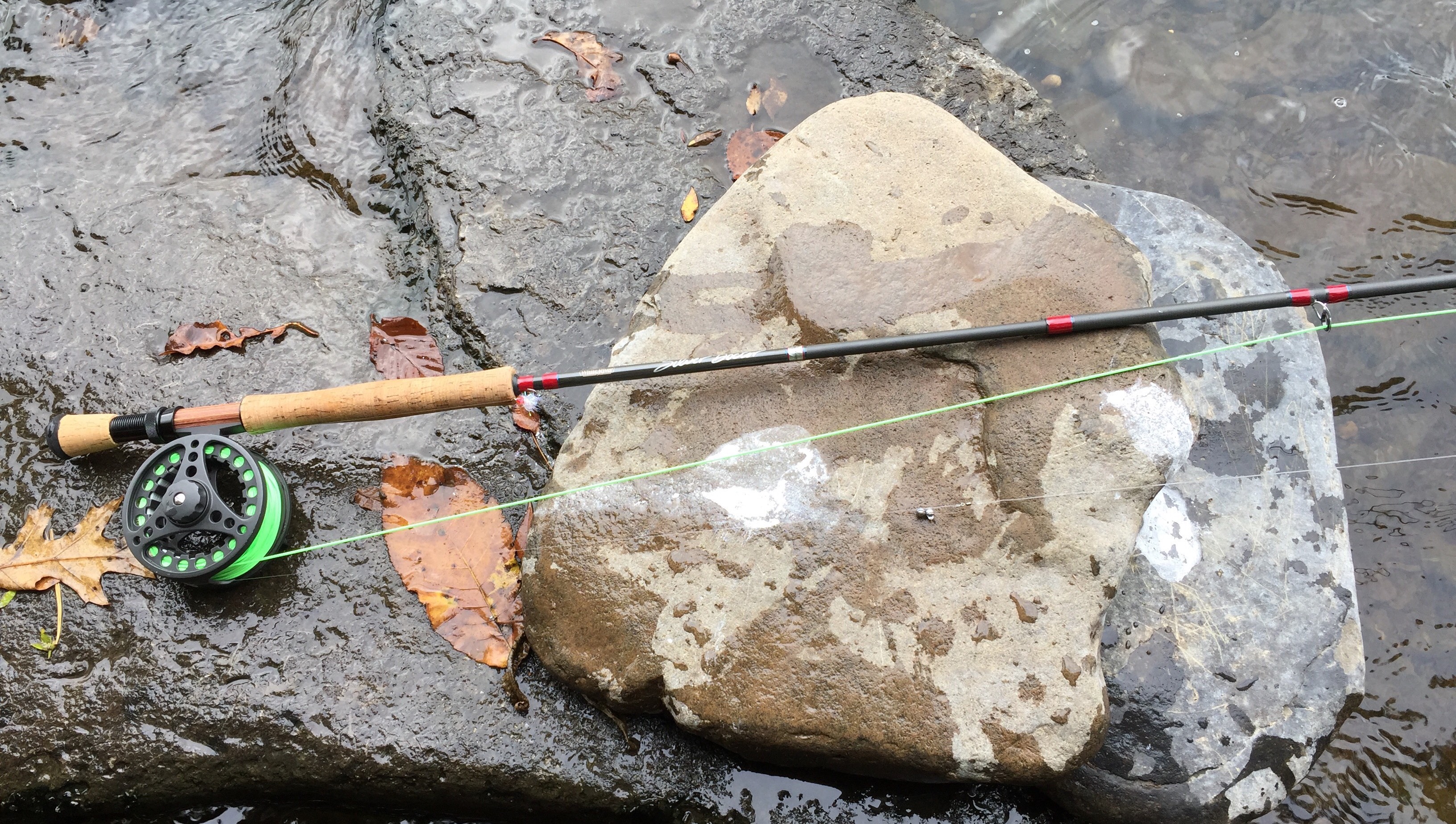 Our second morning started later than our first. We deduced that the fish didn’t run up until the early to late afternoon that we could stand to sleep in a little, get a nice breakfast, and head to the DSR at our leisure. We were dead wrong. As soon as we started down the bank to our fishing spot, Dan’s son spotted a king in the small shallow tributary we had to cross. He made short work of the fish, it was like shooting fish in a barrel, and they had him released within two minutes. By the time we strolled down to the river and got our waders wet we could see that steelhead were running fast and furious. They had not shown up in great numbers but they were definitely moving up consistently in small groups. Intermingled with the steelhead were the last few kings and coho making their way up to Altmar and the fish hatchery. Before lunch even rolled around I had been broken off by two big kings, but managed to land the second one even after she broke me off. I watched as my friends started to hook up to kings and coho and by mid-afternoon we were in the thick of things with more steelhead coming up the river. All told, three members of our group managed to catch a steelhead on our second day at the DSR. 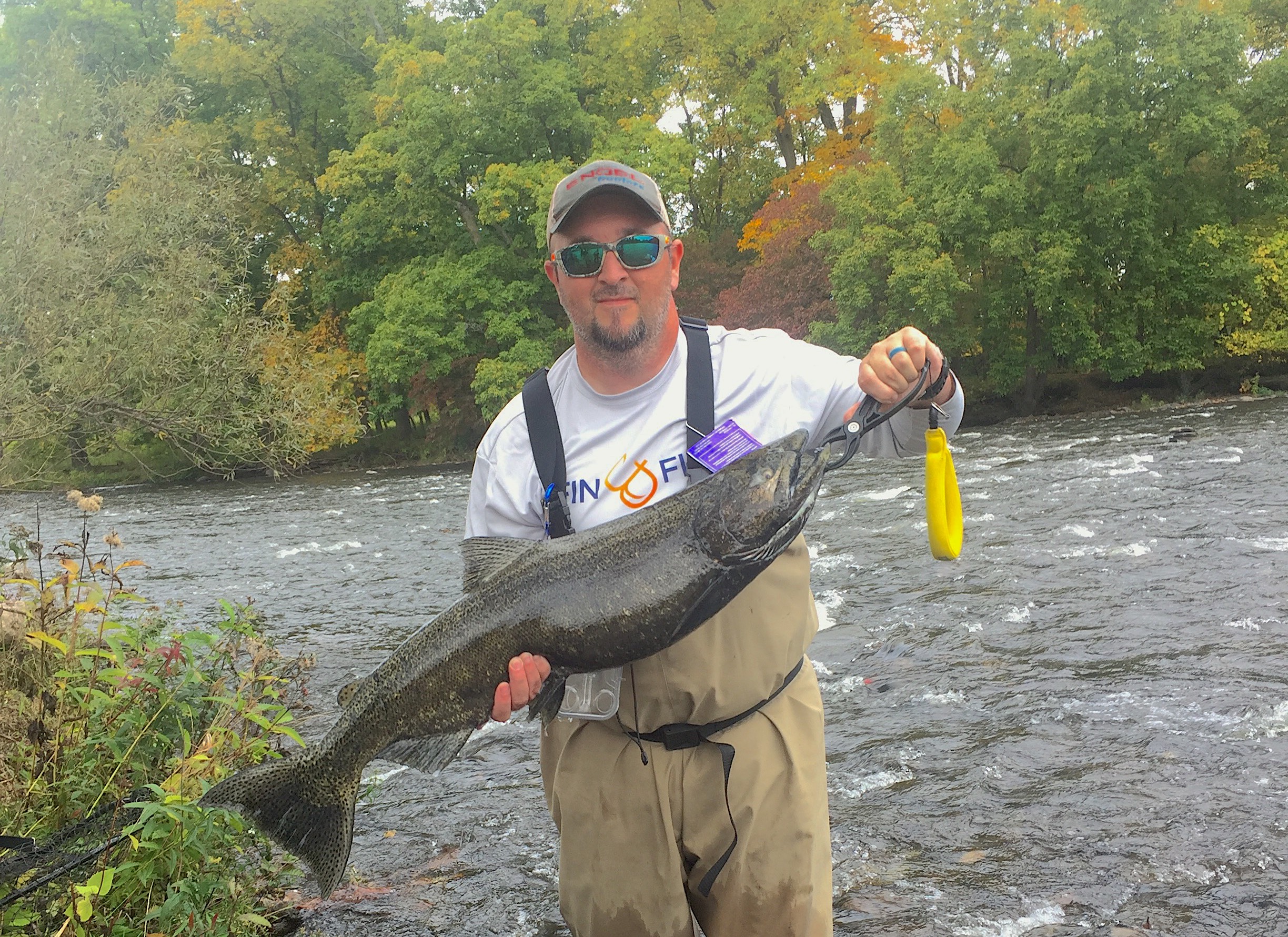 The highlight of the weekend though was watching Dan’s nephew fight and reel in not only his first king on the fly but his first steelhead as well!  The smile on his face and the excitement in his voice made the trip well worth the effort. We can’t wait to go back, on our annual trip, next year.

If you are looking to get in on the steelhead action yourself head on over to the Douglaston Salmon Run and Fin & Field now to grab your passes and book a guide! The steelhead fishing is good now through December, but don’t forget the steelhead run won’t last forever; all things must come to an end.