The billfish tournament season in Baja California Sur kicks off every year, for the last 17 years, with the Los Cabos Billfish Tournament. The tournament is owned by the Los Cabos Tourism Board and produced by Bonnier Corp. (the publisher of Marlin Magazine, Sport Fishing Magazine, and Saltwater Sportsmen and many others). The Los Cabos Billfish Tournament will see 40-50 boats fishing on October 12-14. They are expecting around 300 anglers and crew to compete for around $500,000 in cash and prizes. Prizes are provided in large part by the fantastic sponsors that include Furuno, Aftco, Yeti, Carey Chen Art, Lucas Oil, Bolle, Penn, Accurate, and Viking Yachts. The winner of the tournament, in addition to a pile of cash and prizes, will receive Los Cabos Billfish Tournament Champion branded Aftco apparel and be eligible to participate in the Offshore World Championship. 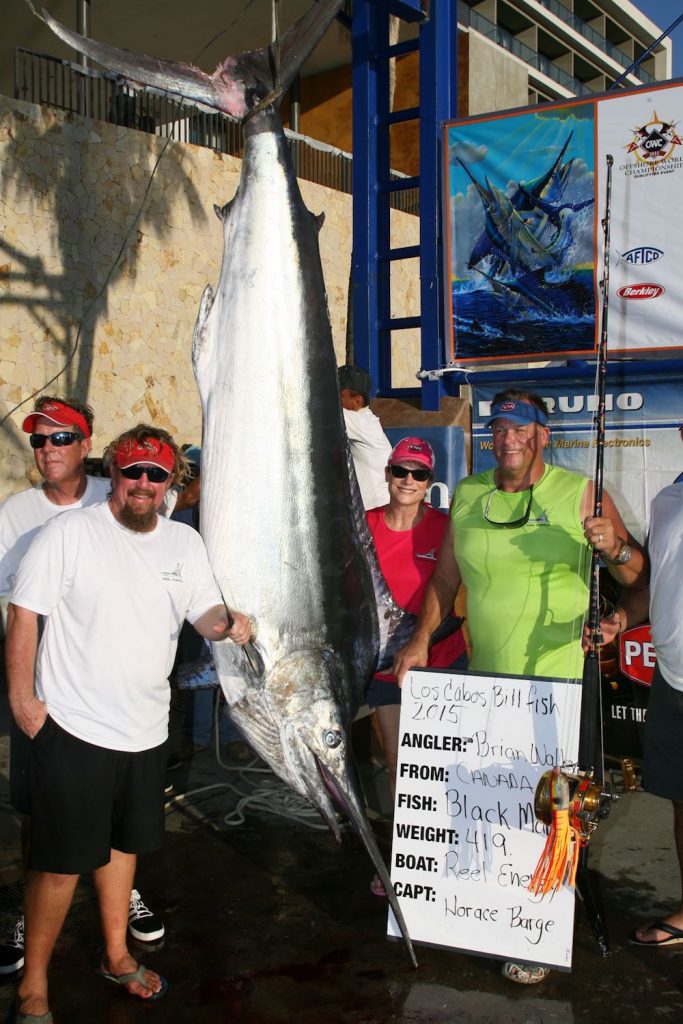 This a tournament run for anglers by anglers. The focus of the tournament is on the participants and making sure they have a great time. The festivities start on October 11th with a captains meeting and kick off party at the Playa Grande Resort Beachside Terrace. The picturesque setting pairs perfectly with the fresh food and drinks. Every evening from October 12th – 14th the weigh in takes place at the Marina Fundadores weigh station. The adjacent Fisherman’s Landing bar and restaurant is a popular place for anglers and the general public to come watch the weigh in, the release videos, and enjoy in the festivities. The Reel Energy won the Los Cabos Offshore Tournament in 2015 and took home $113,175 for their black marlin weighing 419 pounds. The second place team El Suertudo, because they were “all in”, took home $216,675 for their 312 pound blue marlin. The billfish release division was won by Reel Gold who took home $44,700.

Anglers will be targeting all 3 marlin species (blue marlin, black marlin, and striped marlin) as well as sailfish, tuna, dorado, and wahoo. The base entry is $5000 and entering all the additional daily jackpots and divisions is an additional $13,000. For people who are on the fence there are 2 other ways to participate without paying the base entry fee. Boats can enter just the Daily Release Jackpots for $1000 plus $100 per angler. Additionally, teams can just enter the tuna, dorado and wahoo division for $1500 plus $100 per angler to fish for all three days. This way teams can compete in the tournament and enjoy the event for a smaller fee and still have a chance at winning $8,000 a day or more! No matter how you enter the tournament you can enjoy all the tournament gifts and activities including the surf and turf awards banquet ceremony on October 15th.

The tournament is a modified release format. Fish that meet a minimum size can be brought back to the scales and weighed in. Smaller fish are awarded points for being released. Releases are documented on video and anglers and spectators will enjoy the live scoring system. The Los Cabos Billfish Tournament is a qualifying event for the Offshore World Championship. If you want your chance at glory, bragging rights, and an epic payday, check out the Los Cabos Billfish Tournament.