It is our pleasure to announce that Robert “Fly” Navarro is our Most Interesting Sportsman in the World for the summer of 2016. Fly is a fisherman, and we don’t mean that he loves fishing because that would be an understatement. Fishing is his job, his hobby, his passion, his identity, and his life. Fishing is what he unplugs from when he takes a vacation (and those usually involve some hunting). 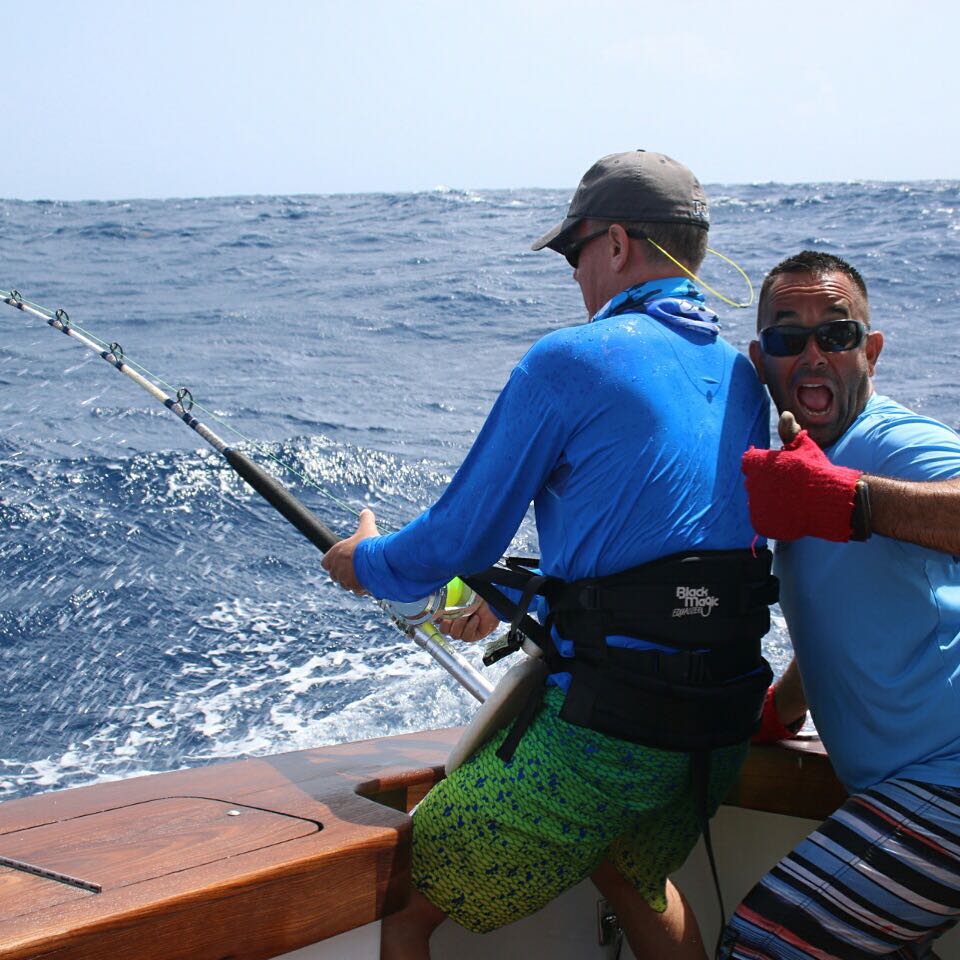 Fly, a seasoned offshore fishermen, is universally regarded as a world class mate and respected worldwide. He took a childhood passion and turned it into a career that took him around the world working on the top offshore fishing boats. Then he leveraged his reputation as a mate to launch a magazine (In the Bite), a marketing agency (Fly Zone Fishing) and several tournaments (The Sailfish Tournament, King of the Hill, and the Gulf Cup Blue Marlin Shootout). He was also recently named the new Tournament Director for the World Cup Blue Marlin Championship.

As a kid, when he started fishing, he was just like the rest of us. Young Fly would spend time fishing with his dad, and though it was his favorite activity it hadn’t consumed him yet. That changed when he learned that fishing could also be a profession. Fly was initially approached to be a mate in the ’90s because he spoke Spanish and he traded his translation services to learn how to fish. He began to build a reputation as a hard worker and a guy who knows how to conduct himself while fishing offshore. He never lacked opportunities to join a crew and fished as a mate on boats throughout Central and South America all before the plethora of television shows, the high profile tournaments, and today’s internet sensations. He was living the dream in Venezuela, at least the day dream that most of us have of fishing every day. But eventually he was ready to consider buying a house and wanted a real home base back in the US. 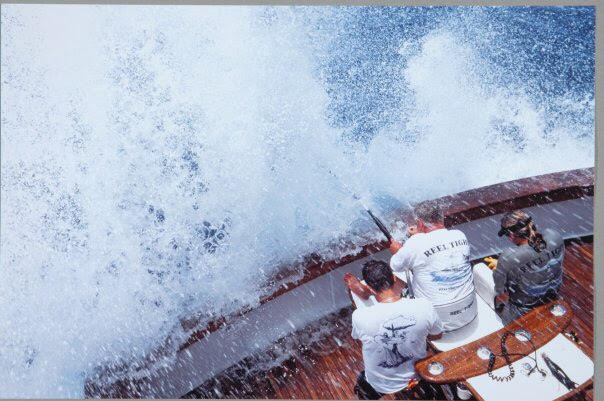 Fly says that the defining moment of his fishing career, and probably his life, was being hired by Jim Lambert in 2000 as a mate on the 80′ Merritt Reel Tight after coming back to the states. Jim ran his crew differently than Fly had ever seen, and was a trend setter in that regard. The “Boss” demanded a lot from his crew but not the way you may think. He wanted them to be more than fisherman and demanded that they be dedicated to presenting themselves as well as the boat as professionally as possible. He wanted them to be outstanding members of the community. When his crew walked down the dock, he wanted people to wonder if it was a crew-member, the captain, or the owner. He mostly wanted his crew to be in the right mindset to do great things. Jim became more than a boss to Fly. In fact friendship, mentor, and father figure doesn’t quite do it justice either. 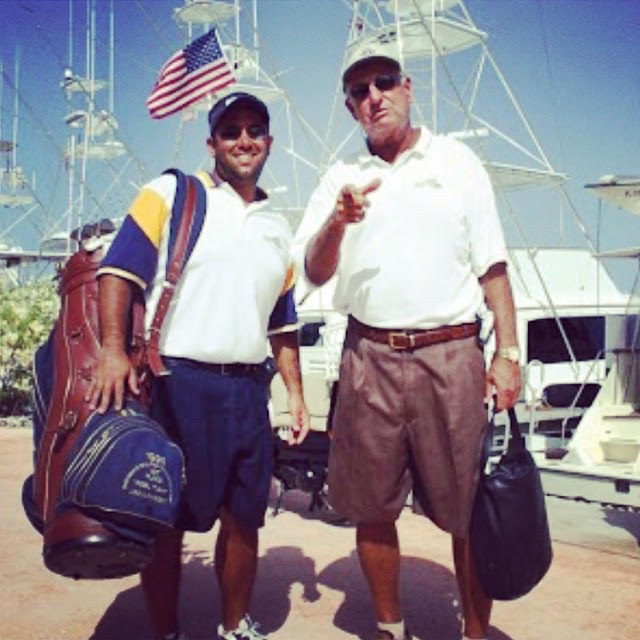 Hearing him talk about Jim is pretty special. It’s rare in life to meet someone who has that much impact on you. He gave Fly a new way of looking at life. He led by example and taught Fly how to treat people by treating every single person with class. Fly is emphatic when he states that Jim taught him how to be a man. They got to fish together for 8.5 years (almost 8 years longer than doctors told him to expect) until Jim passed away in 2008 from cancer. To bring it full circle, Fly spent 5 years teaching Jim’s grandson how to fish for blue marlin. In life you get the family you are born with but you also get the family you choose. 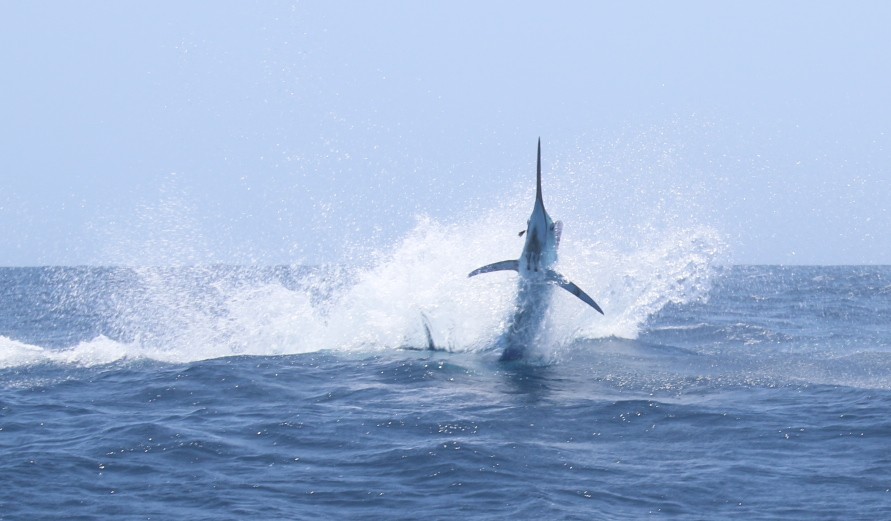 For the next chapter in his life Fly accepted a job offer in Hawaii. People asked why he was switching to the Pacific after 20 years of experience in the Caribbean. Fly went to Hawaii exactly because it was out of his comfort zone, not in spite of that. Without a doubt it was a difficult change, but he enjoyed a lot of new firsts. He was officially the captain for the first time and he spent his first full season fishing in Hawaii. He also embraced the Hawaiian culture that is so rich in loyalty and family. Fly became close with Randy Llanes and the whole Llanes family, in fact they came to call him ‘ohana (a term of endearment meaning family). Though he only lived in Hawaii for a year, the culture and his friendship with the Llanes had taught him so much about life and whats important. 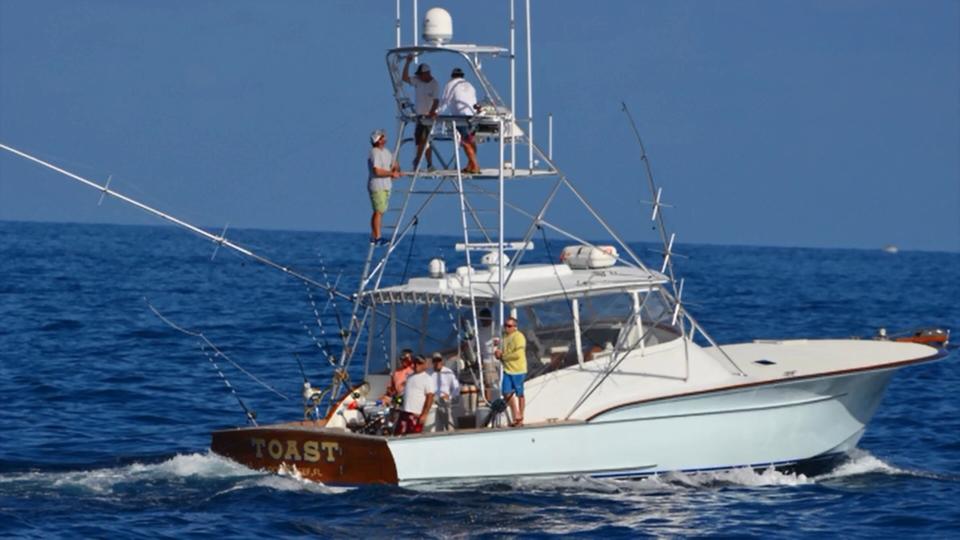 Back to Florida Fly took some much needed time to reflect on life, and fish, and figure out what to do next. He knew he already had the best boss in the world, and after working for Jim did he really want to work for someone else? In the absence of a plan Fly decided to go with the flow. He freelanced on some boats while staying open to what the universe had in store. His personal belief is that everything will fall in to place, just don’t force it. This belief served him well in the past and was about to once again.

Fly remembers the exact day that he launched his first tournament, because it was on his birthday! He woke up August 8th, 2011 and decided to start a business. He made phone calls to his friends and a plan began to form as everything seemed to fall into place. By that afternoon when his sister called to wish him a happy birthday, he told her the plan for the Gulf Cup winner-take-all tournament that he just invented. He modeled the tournament after the World Cup and borrowed many of the rules as well. There are 10 weigh stations throughout the Gulf so teams from the whole region can compete on the same day. This was Fly’s first, and certainly not last foray into building and managing a tournament.

While in Hawaii Fly got the inspiration for another contest. The concept is simple enough, in Hawaii marinas all the mates would chip in $100 at the beginning of each season, at the end of the season the mates on the boat with the biggest marlin win the pool. Fly’s version is called King of the Hill. Fly wanted to recognize the hard work and expertise of the mates and create a pool with some real money in it. His newly launched contest comes with a $1500 entry fee and the fish has to be weighed in during a sanctioned tournament with a published weight. The winning crew takes home all the cash and of course some bragging rights. To level the playing field there are two separate zones, the East Coast and the Gulf. 2016 will be the second year running for this contest.

As his own tournaments were taking off, Fly set his sights on one of his favorite long running tournaments, the Blue Marlin World Cup Tournament. He formed a great relationship with the family that owns it and as luck would have it the World Cup director was set to retire after last years event. He called Fly and informed him he was ready to retire and officially asked Fly to be his replacement. Fly not only accepted but told him he considered it a great honor. Fly has spent the last year promoting the World Cup. 149 boats compete in the tournament and it has a rich 31 year history. It is a challenging tournament to run because there is a mountain of information and a mountain of participants. The biggest challenge is how to disseminate information. Luckily Fly is dialed in to social media and has streamlined communication and tournament updates. Getting the right information to the right people at the right time is necessary to pull off a global tournament like this. In fact, Fly is working to set up live updates on the hour every 2-3 hours during the tournament.

His most recent tournament started as a conversation with some friends at home in Palm Beach. They were lamenting that the local tournament scene was anemic, how great would it be to have a tournament and a celebration of fishing right there at home. Fly decided to run full steam ahead and kicked off the tournament and simply named it The Sailfish Tournament. The whole thing came together in just 7 weeks. He kept the rules simple and the fishermen wanted a simple dock party at the end of the day. As no docks were available Fly talked to his friends and created a daytime car show, at the end of the day the fishermen showed up like celebrities and the party continued into the evening. The first tournament was held in January of 2016 and they are getting ready for next year where they will raise funds for Fish for Life. 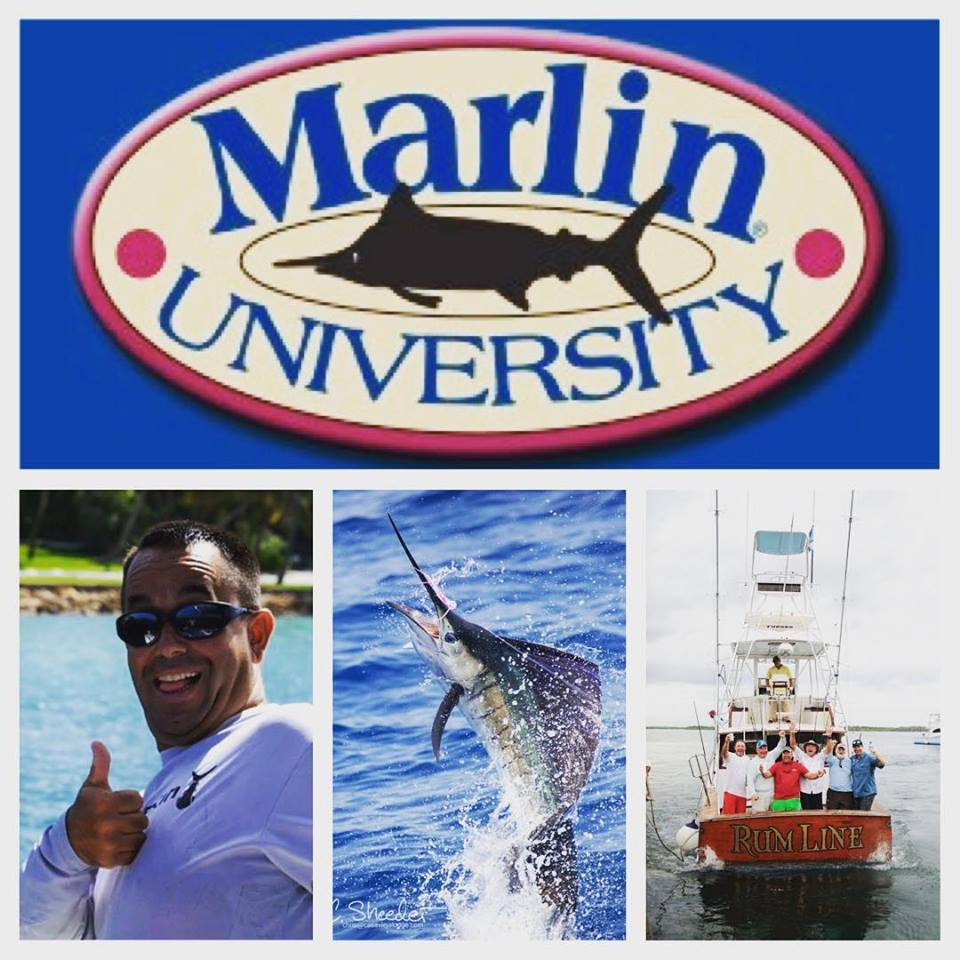 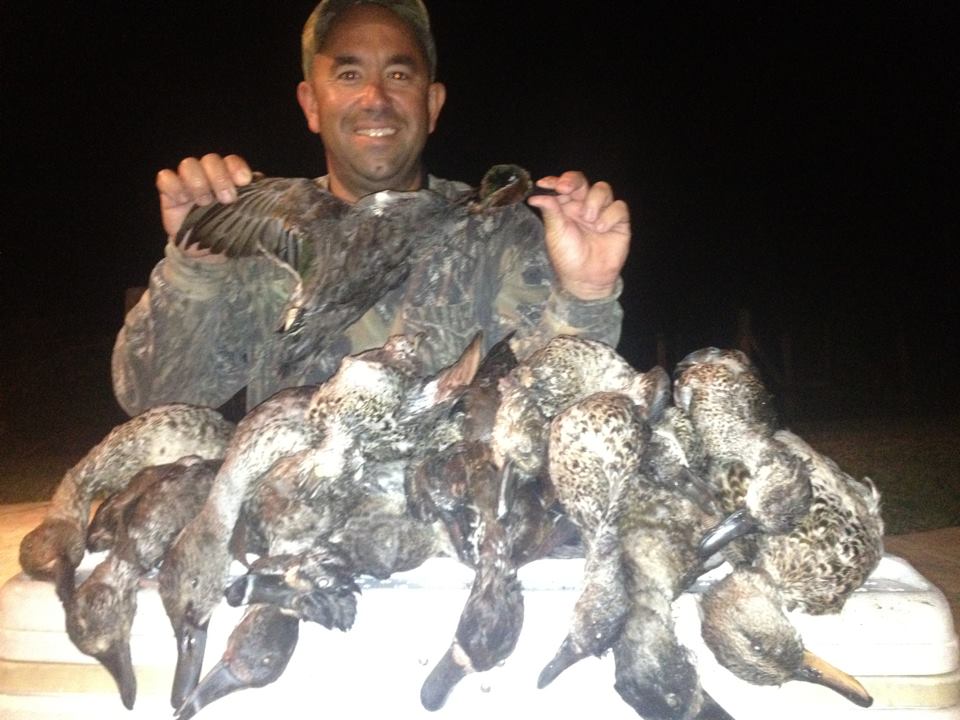 Fly has an end game when it comes to his fishing business. “I want to be able to make enough money fishing so I can take time off to hunt”. He says he fishes his ass off so he can go hunting. He loves archery and has never shot a turkey with a gun, only arrows. For whitetail deer, last year he got a 9 and an 11 with a bow and a 13 with a rifle. “I love sitting in the tree, in the woods, a chill in the air and shooting whitetails” he said. Next he wants to take his bow and Elk hunt. The sports are so similar according to Fly, especially big game hunting and big game fishing. Look for their travel paths and where/how they feed. 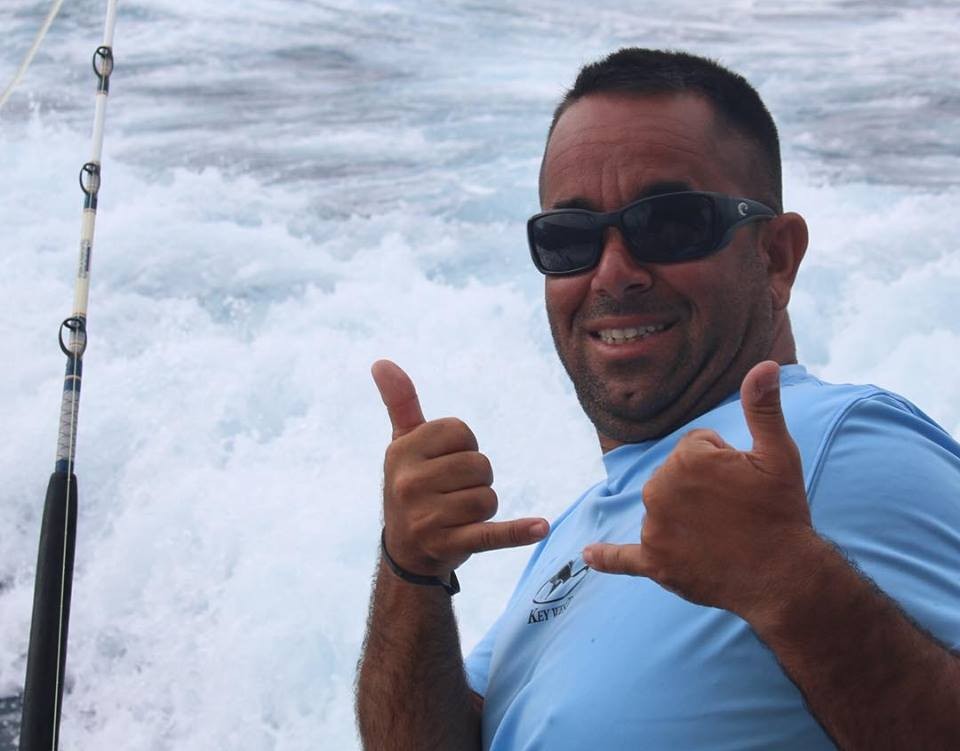 Fly is the first to admit that what he does is a lot of hard work, it is not all sunshine and rainbows and he has made sacrifices. You can be a professional fishermen, or a really good husband and father. Doing both is next to impossible. You can’t fish 150-200 days a year, travel anywhere and everywhere last minute and have a home life. You have to make a choice. Neither choice is better than another, just make your choice on purpose knowing what you are getting and what you are sacrificing. Be realistic. Your most valuable possession is your time, make sure you spend it on purpose or you might waste it.

Lastly, Fly is an open book. Catch him on Instagram – @thefly100 or @flyzonefishing,  Facebook – Robert Fly Navarro or on Twitter – @flynavarro. Feel welcome to reach out and ask questions. Seriously, this guy loves to talk about fishing. That’s his point, his goal, to get people talking about and going fishing. 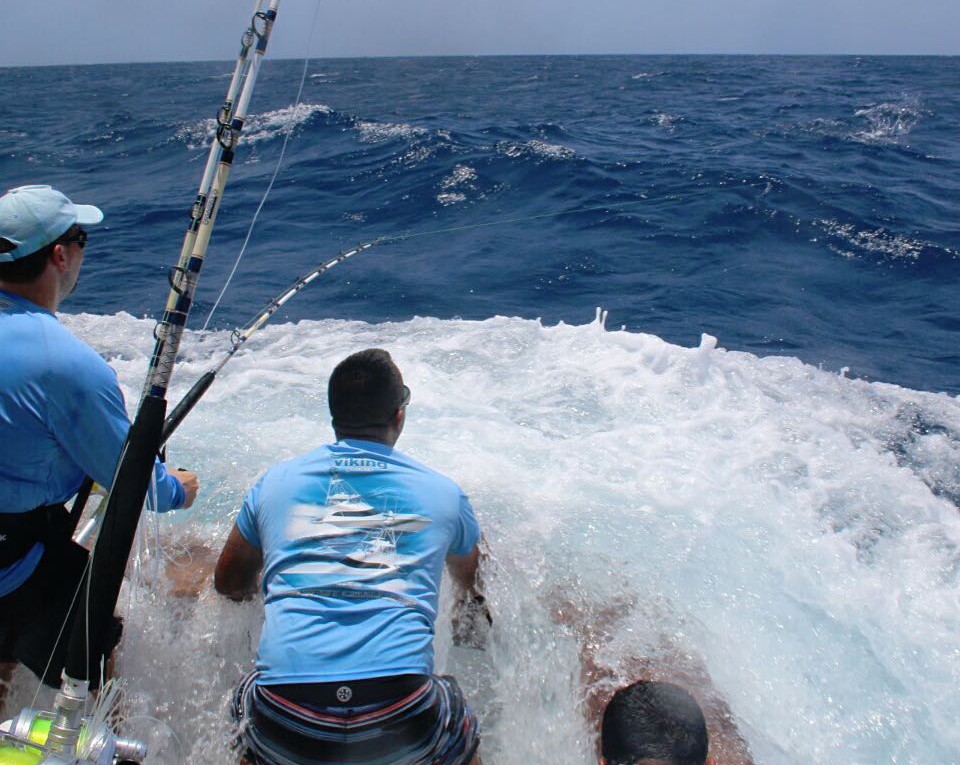 Check out The Most Interesting Sportsmen in the World: Spring 2016

Written By
Staff Writer
More from Staff Writer
Being in the fishing and hunting industry, in some ways, is no...
Read More

0 replies on “The Most Interesting Sportsman in the World: Summer 2016”