The shrill sound of a woman being attacked pierced the darkness. I was in the middle of the woods, on the Eastern Shore of Maryland, and most certainly was NOT alone. But although the sound had caught me off guard, I wasn’t the least bit scared. This wasn’t some zombie apocalypse or an escapee from prison wreaking havoc in the woods. It was the bugle of a sika deer, a Japanese relative of the European red deer and American elk.

Due to Ryley’s successful elk hunt we had a full freezer. This took the pressure off of me for opening day of our firearms season so I opted to take a bit of a journey to see if I could connect with a sika deer or another nice whitetail. As luck would have it, my brother-in-law, Ronny, was part of a hunting club on the Eastern Shore of Maryland. Ronny is my surrogate father in a way. My Dad really wasn’t much into hunting and fishing, but Ronny came from a family passionate about the outdoors. So growing up he was my mentor and it was time that we spent some quality time together again at deer camp.

So if these were Japanese relatives to our American elk, what exactly were they doing here in the marshes and pine woods of Maryland’s Eastern Shore? As far as the Maryland Department of Natural Resources can tell the sika deer were brought to Maryland in the early 1900s by Clement Henry when he released about 5 or 6 deer on James Island. They currently can be found in four counties as well as on Assateague Island. They prefer the marshy habitat which has earned them the name of “Marsh Ghost”. Luckily for hunters in Maryland they seem to be able to coexist side by side with our native whitetail and are not in direct competition. This means we have two thriving deer populations in the state which can be hunted during the same seasons. To find out more about the Maryland Sika Deer you can read up on them on the Maryland DNR website.

The plan was for me to travel down on Black Friday and spend the night in his camper. I would hunt Chesapeake Forest land on opening day and then, depending on how things went, stay a few more days. Going into the hunt I was optimistic but was definitely prepared for failure. The area I would be hunting would see high pressure on opening morning. There have been plenty of mornings when the sun came up that I felt like I was sitting in a pumpkin patch, but such is the reality of public land hunting in the East.

As I parked at the access road there wasn’t a soul in sight. Maybe this was going to turn out to be more successful than I envisioned. As I crept through the pine trees by the red light of my headlamp it was difficult to see even 5 feet in front of me because of the fog coming off of the marsh. I pushed deeper and deeper into the woods and found a nice spot that had some straight trees and was close enough to the water that I might be able to ambush a deer coming or going. Surprisingly I had the climbing tree stand up about 15 feet in a tall pine within minutes. Now the waiting game would begin. 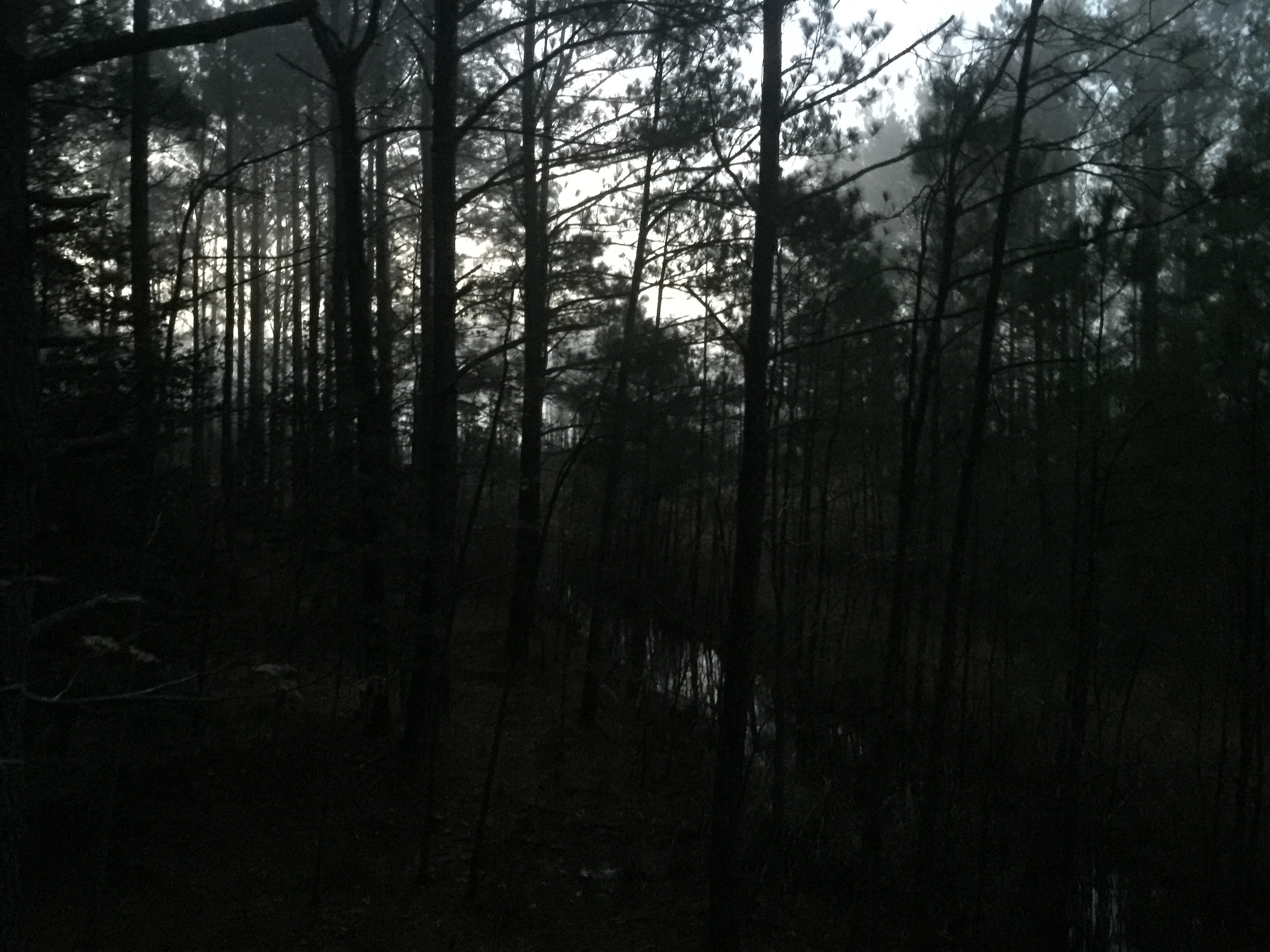 As the darkness began to lift I could hear the sika bugling off in the distance in nearly all directions. The fog started to thin as the sun warmed the air and I could begin to make our finer details of the area around me. As the sun started its climb in the sky the bugling of the sika faded off until there was only silence. The silence that comes with sitting in a pine forest where barely a footfall can be heard as the breeze blows overhead and the pine needles absorb all sound.

Legal shooting time had arrived and as I sat in the silence I was overcome with a feeling of belonging. Belonging in a pine tree forest, surrounded by the salty marsh that funneled into the Chesapeake Bay. Belonging to the cool breeze that faintly blew in my face letting me know that the wind was in my favor. Belonging on public land on the opening day of rifle season. More than anything  today was a celebration of all the things we as hunters sometimes take for granted; beautiful scenery, favorable weather and public land.

The silence was shattered by the tell-tale sound of a deer making its way through the brush off to my right. I strained my eyes and ears to try and find the originator of the noise. A mature sika stag can weight as little as 90 pounds, fully dressed and a sika hind can be substantially smaller; we are talking the size of your average household dog. But for some reason, I just couldn’t locate anything. That’s when I saw a flash of brown and realized it was an endangered Delmarva fox squirrel. As I sat there for the next hour I could hear and see countless other fox squirrels in my general vicinity. So much for being endangered, they were all over the place without a fear of the overweight hunter perched precariously in one of their pine trees.

After a few hours I headed back to the truck to go have breakfast/lunch at deer camp with Ronny. When I arrived he already had the fried potatoes going along with a couple pounds of sausage already fried up. He whipped up some scrambled eggs and we sat around eating and talking about our morning’s hunts. Turns out I wasn’t the only ones not seeing deer, sika or whitetail. The deer just didn’t seem to be moving that morning despite all the hunting pressure. I only saw two whitetail does hauled in on four-wheelers that morning, both from Ronny.

Buoyed by the fact that others weren’t having any success either, I set back off for the woods to get nestled in. I opted to try out a different tree in the same area, one that would afford me a little better vantage point to see over the phragmites grass and into the marsh. The next few hours were filled with the honking of geese as they made their way to the safety of the water to roost. As dusk approached I could hear sika bugles close by, but could tell by the sounds that they were other hunters trying to coax in a stag. I had some fun with them when I would quietly answer their bugles with a mew, like I was a hind and even once ripped off a bugle of my own, knowing that it would serve no true purpose of attracting a stag. 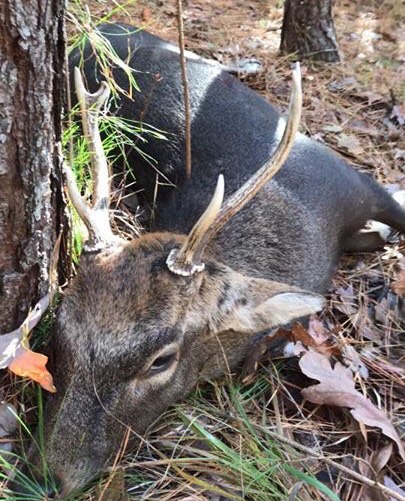 The sun set and the darkness enveloped me. As I climbed down the tree I felt a surprising feeling; contentment. I had been unsuccessful in my days hunt but I had spent a glorious day out hunting and chasing the aptly named marsh ghost. When I got back to camp one of Ronny’s best friends had managed to connect with two nice hinds and a childhood friend of mine, Tommy, had managed to connect with his first sika deer, a gorgeous six point stag. We sat around the rest of the night talking, drinking and reminiscing about past hunts until it was time to call it a night.

Even though Ryley and I had been blessed over the last few fishing and hunting trips we had taken, sooner or later I was going to end up coming home empty handed and this time I was okay with that. It’s not always about the kill, it’s about the chase and this chase lead me back to the man who had brought me into hunting and allowed me a chance to pursue an animal few even know exists in Maryland.  If you want to try your hand at doing a little “ghost” busting for sika deer, head on over to Fin & Field and check out our top notch outfitters who are waiting take you on the hunt of a lifetime!

Written By
Guest Blogger
More from Guest Blogger
The shrill sound of a woman being attacked pierced the darkness. I...
Read More