Shawn McCardell is the kind of fishermen who gets more joy watching his son, Ryley, catch fish than he does from catching fish himself. There is a long history in America of parents taking their kids fishing and at Fin & Field we applaud Shawn for passing down the love of the outdoors, respect for our natural world, and a passion for fishing. Shawn and Ryley are no strangers to father and son fishing adventures. They live in Maryland and at 10 years old Ryley has already landed a 53″ muskie. Ryley is already an experienced fishermen but until this Fall he had never fly fished and never caught a salmon!

Shawn works as a hunting safety instructor in Maryland and his co-worker, Dan, arranged a trip to the Salmon River, in NY. Shawn jumped at the chance and since most of the adults on the trip were bringing kids, it was a no brainer for Shawn to bring Ryley. Shawn and Ryley were excited for the combo fishing and camping trip, and great fish reports had them very excited, but there were a few surprises in store for them! 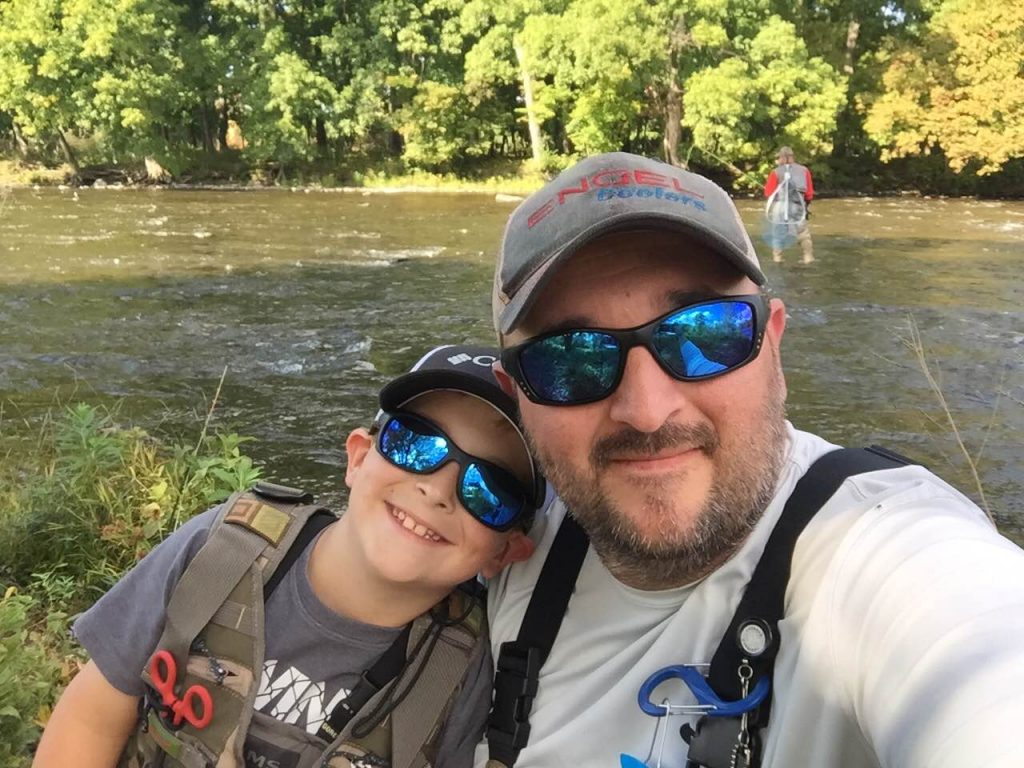 After arriving at the Salmon River and setting up the camp site they spent the first day fishing the public water areas. Ryley had never been fly fishing so his dad and Dan showed him how to cast. He spent the first day working on presenting the fly, mending the line, and identifying deep water where salmon should be holding. The problem was, the water levels had dropped and the salmon were not moving upstream in large numbers. In fact the whole group only saw a small number of fish the entire day. The conditions were simply not great that day and fish were scarce. Ryley got in some great casting practice and learned that sometimes being a fishermen means being patient and being persistent. 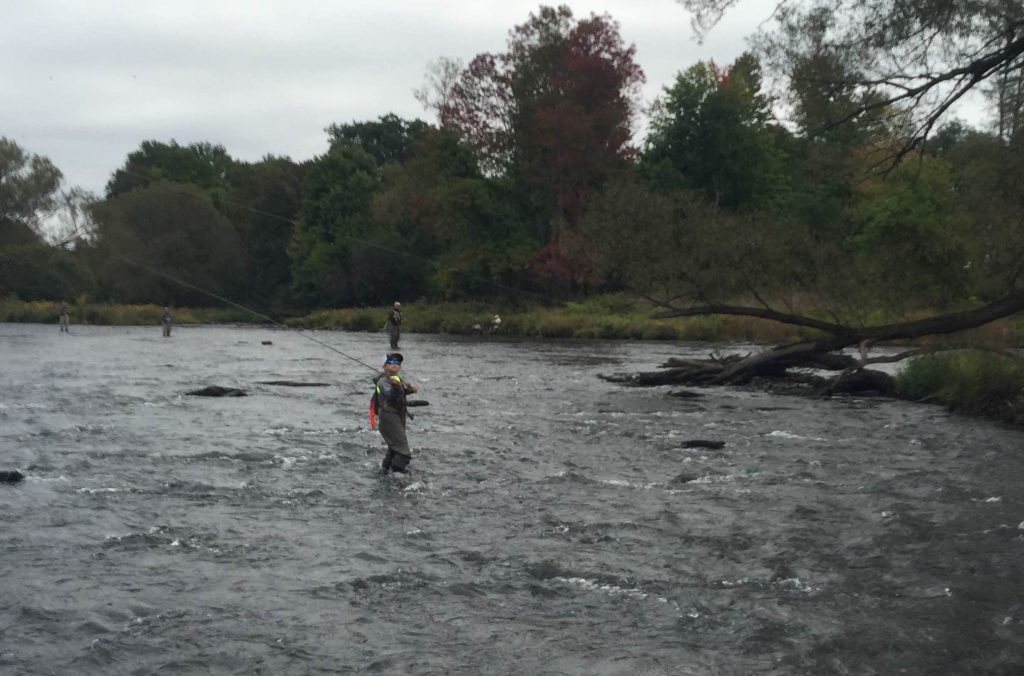 Back at the camp site that night it started to rain. The rain, while camping, is never a welcome sight. But when you are a fishermen battling low water levels, the rain is a little easier to put up with! Despite the hassle the rain presented to the camping, it renewed faith among all the anglers that the next day would be a different kind of day.

The next morning the group gave up on the public waters and fished the private waters of the Douglaston Salmon Run. First thing in the morning, Shawn, Dan, Ryley and the rest of the group had the stretch to themselves with the exception of 2 guides with clients working the opposite bank. By the afternoon they had the whole river to themselves.

Unlike the previous day they saw a steady flow of salmon swimming upstream. They were getting a lot of shots at fish but Ryley still had not hooked up and was starting to get discouraged. Dan understood that fishing is a very mental game, in order to get Ryley’s head back in the game he handed Ryley a hooked fish to fight. Ryley got to feel what it was like to fight a salmon on a fly rod and he got to practice bringing the fish to the net. Unfortunately the 10lb salmon broke off at the net but Dan’s plan worked and Ryley was reenergized, refocused, and committed to catching a fish. 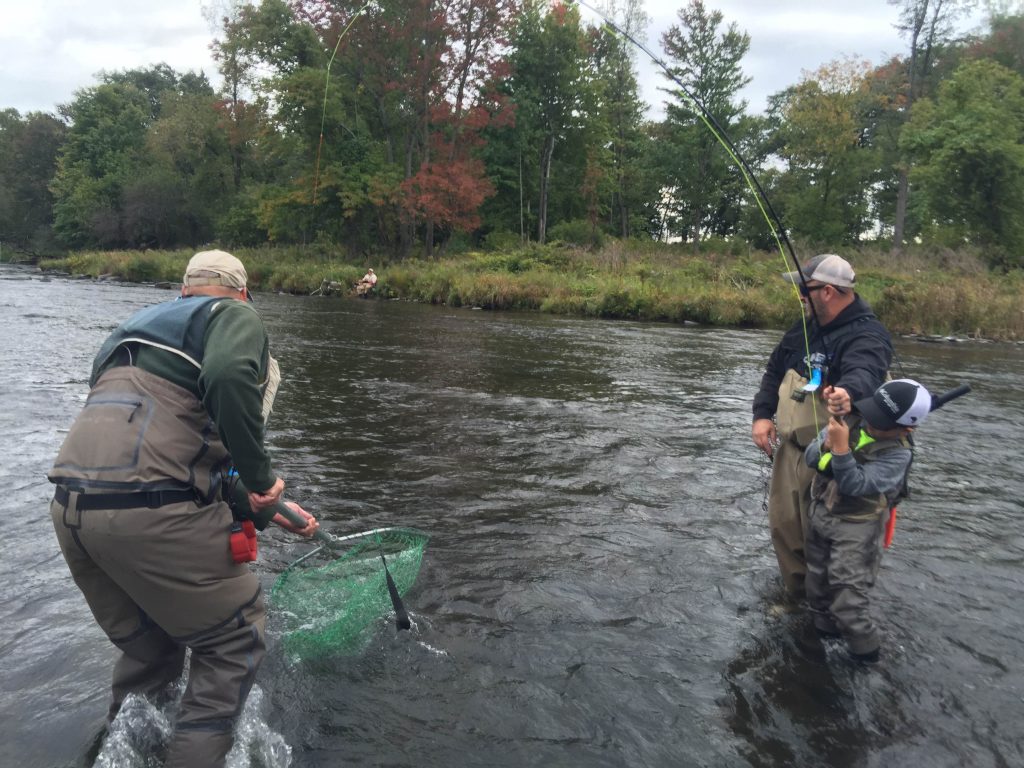 A few short minutes later Shawn looked up and saw Ryley doing battle with a fresh salmon, one he hooked all by himself. The line was screaming, the rod was bent over, and the look on Ryley’s face told Shawn everything he needed to know. Dan helped net the fish but Ryley wasn’t done yet. Now Ryley had it down, he was in the zone. Ryley made quick work of hooking a second fish, even bigger then either of the first two fish! Shawn was there to help, so was Dan. The two fish Ryley caught were filleted and brought home so that Ryley could share with his dad the joy of bringing home the days catch and feeding the family. The whole family agreed that these wild salmon were delicious! Well done Shawn, well done Ryley, we look forward to hearing about all your future fishing and hunting adventures! 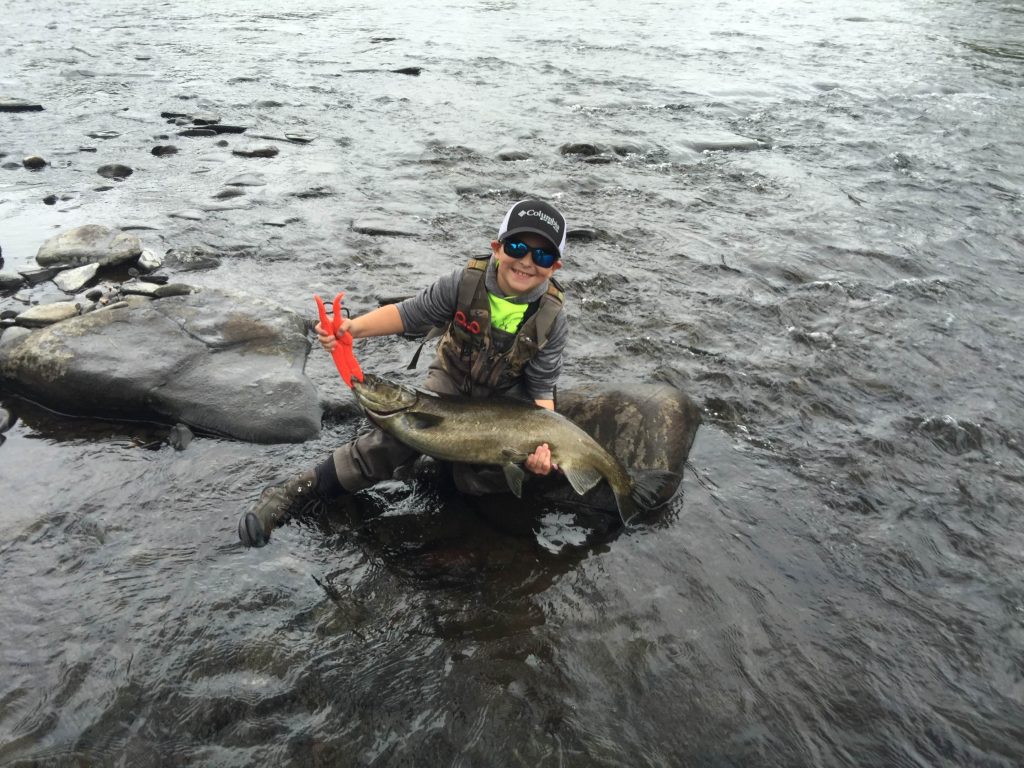 Written By
Daniel Cohen
More from Daniel Cohen
Hunters and fishermen are conservationists at heart. Our passion for the outdoors drives...
Read More