The sun steadily began to rise over the Atlantic, noticeable over the marsh grasses. The winds were moderate coming out of the west, fighting against the outgoing tide that was trying to empty the water out. The clouds were covering the sky, much like they had done for the past week; keeping me from the sea.

As I drifted back further in the cove the water started to come alive as baitfish splashed on the surface and the air was pierced by the sounds of seagulls flying overhead. Cast, slowly retrieve, cast slowly retrieve became my rhythm as the wind pushed me towards shore. The cut was narrowing more now, no more than 15 yards wide, as I neared a bend that would lead me towards success or failure.

I was too low to see if anything lay hidden in the waters on the lee side of the bend. All I saw was baitfish being pushed, just as I was, around the bend. With one last cast I slowly started my rhythmic retrieve; twitch, twitch, pause. Before I could start anew the shallow water exploded as my lure gave pause and all hell broke loose. 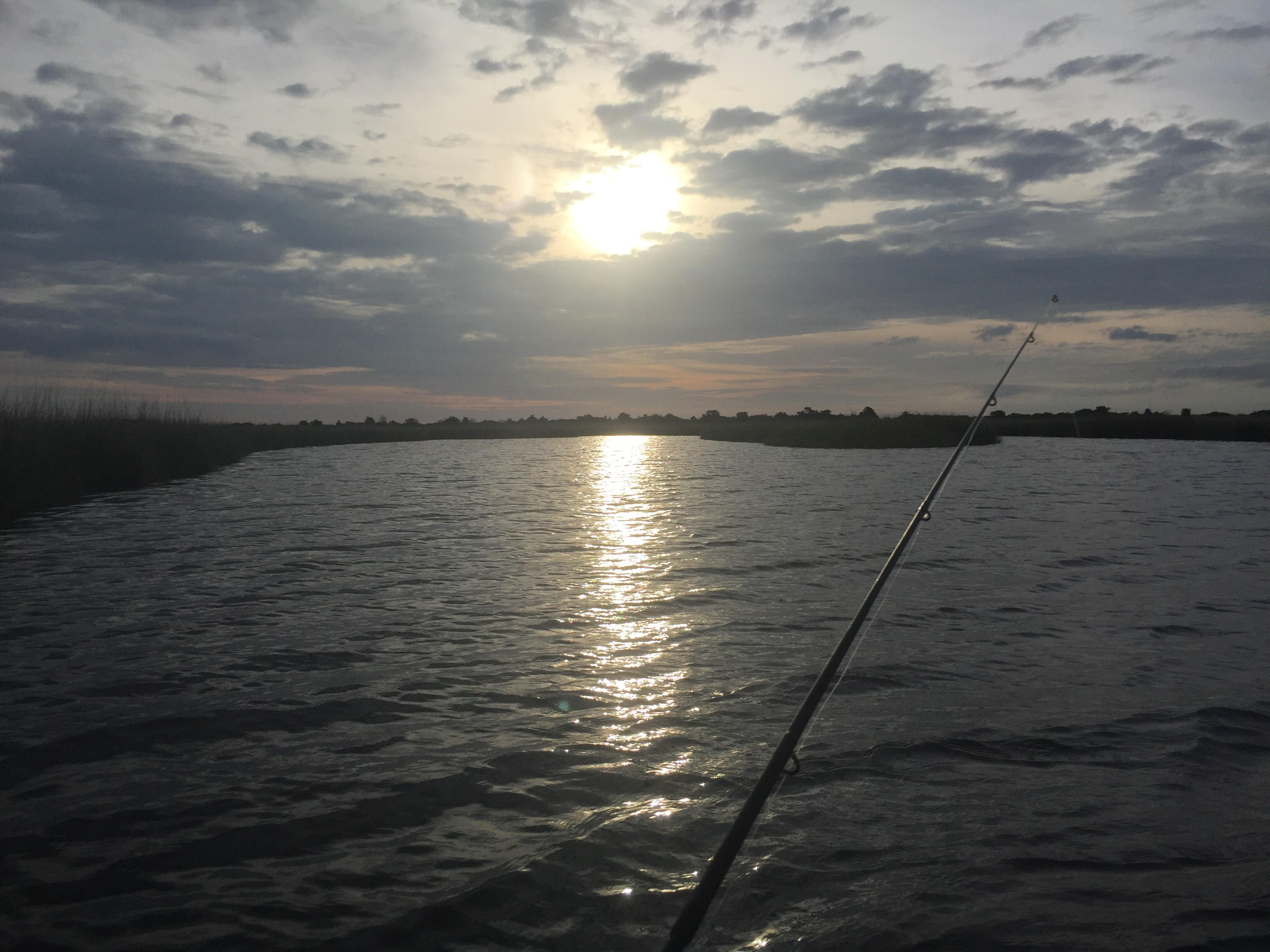 Here I was, for the fourteenth year, in the magic that is the Outer Banks of North Carolina. The barrier islands run nearly 200 miles from southeastern Virginia down the coast of North Carolina. The islands protect the shallow sounds from the relentless Atlantic Ocean. I have been vacationing here with my family every year at the end of June. Recently I have been chartering boats to check off bucket list fish such as cobia, tuna, marlin, red drum and wahoo. Each year, success has eluded us. This year was going to be different; this year I was going to take control.

Kayak fishing has exploded on the scene in recent years and is taking the bass fishing world by storm. Suddenly anglers who couldn’t afford an expensive bass boat could go solo and get to places professional bass fisherman could only dream of, thanks to the kayak. I figured if it could work for bass fishing it could work for inshore and even saltwater fishing.

So I did a little research on kayak fishing in the Outer Banks and hooked up with Wilderness Systems Kayaks Pro Staffer, Rob Alderman. Rob grew up in the Outer Banks and has been featured in several publications on the local and national level; he knows how to fish. A few years ago Rob transitioned from surf fishing to kayak fishing and hasn’t looked back since. He operates a kayak guide service out of Nags Head as well as an online fishing forum FishMilitia.com.

I was looking forward to a saltwater adventure beyond the breakers, catching some of my bucket list fish. High winds and unpredictable thunderstorms kept us off the water and out of the kayaks nearly all week. We checked the forecast hourly to see if a window would open up that would give us enough time to shoot out and back in before disaster could strike. Unfortunately the saltwater experience is going to have to wait another year, but we did manage to find ourselves a window where we could take the yaks out in the sound for some inshore action. 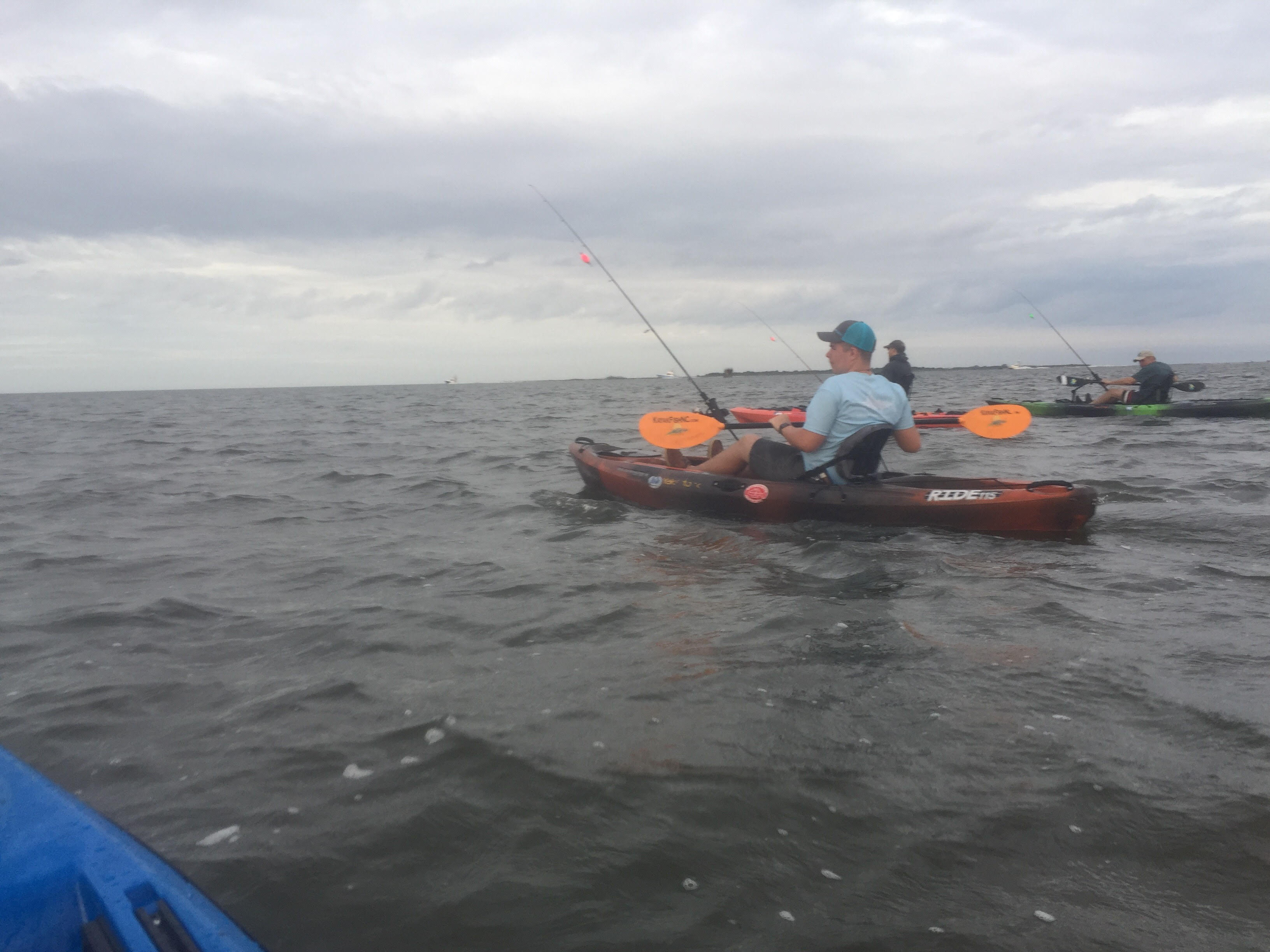 I was hoping that I would physically be up for the task of paddling for half a day, let alone catching a fish. But Rob has a calm confidence about him that puts you at ease knowing that he has your back when things get rough. Once we started paddling out, Rob entertained us with fishing tales and stories of life on the Outer Banks. Before we knew it we were in the salt marsh discussing the plan for the day.

Rob had outfitted us with Wilderness Systems Ride 115 kayaks and 7 ft Ugly Stik GX2 fishing rods matched to Diawa Strikeforce 2500b light spinning reels. The plan was to use popping corks with jig heads suspended a few feet below, tipped with Berkley Gulp Alive swimming mullet.

As the water exploded around my cork, my cork was drug completely under the surface of the water. Line sung off the reel and the fish took me toward the mouth of the cove. I couldn’t imagine what I had hooked into that could be towing me against the wind, in such shallow water. After a few minutes I gained enough ground on the fish to attempt to pull it into the boat. Every time I would get the fish close enough to the surface to identify it, it would quickly go left or right and drag the kayak in circles. My only saving grace at this point was that as I fought the fish in circles the wind slowly pushed me toward shore where I ended up being able to wedge the kayak into the reeds to stop it from moving.

As I finally inched the fish closer to the surface I envisioned a monster trout or a doormat flounder weighing in excess of 10 pounds. What I saw instead was a flash of coppery gold and a small black spot. I finally had my first red drum, in a kayak no less. I boated the fish quickly and marveled at the size, or the lack of size that is. Especially considering this fish had just taken me for a sleigh ride. I cannot even fathom what it would feel like fighting a bull red in a kayak. These truly are hard fighting fish. 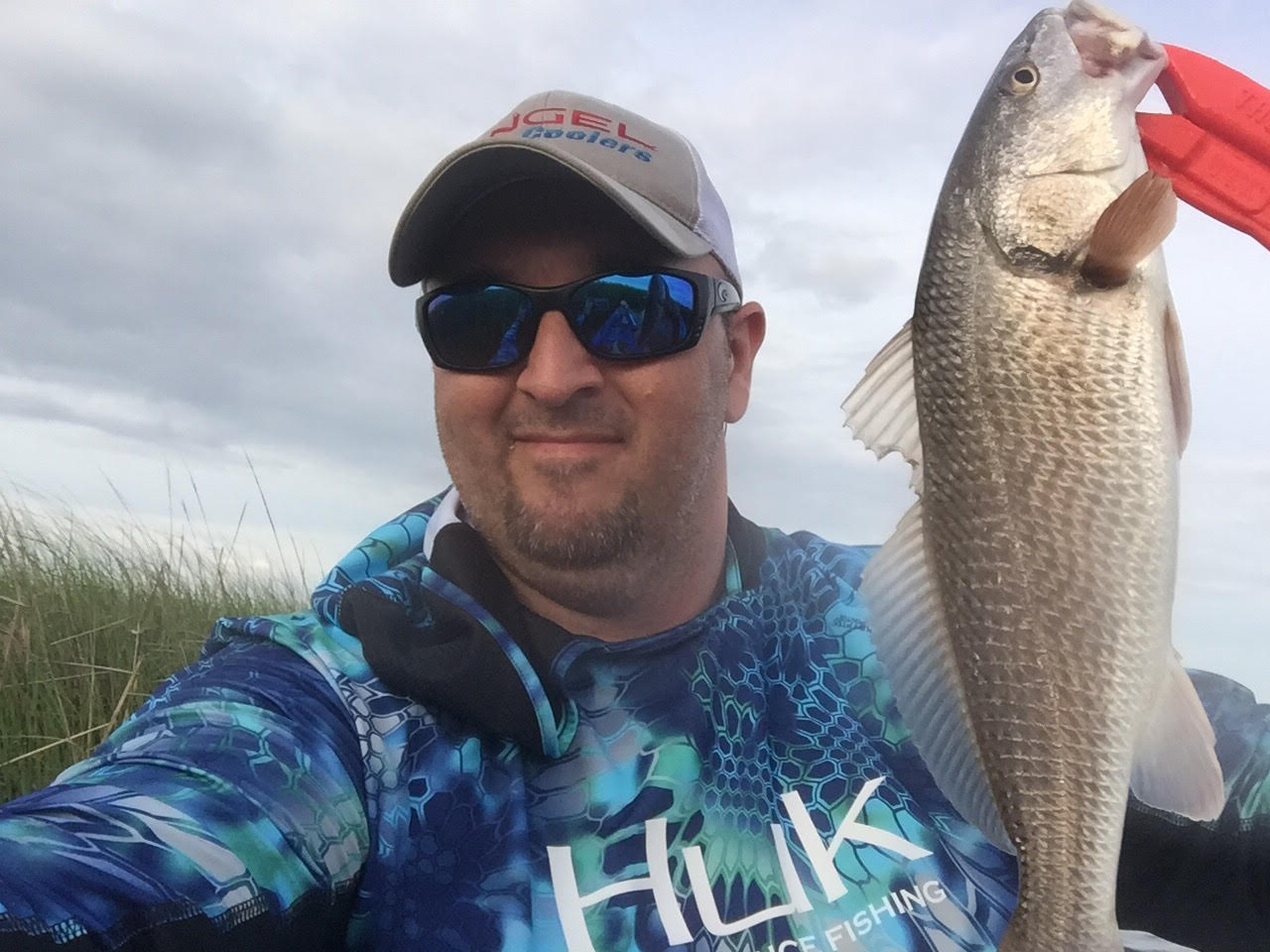 After a few pictures I put the puppy drum back in the water and watched him quickly swim away, not even bothering to measure him for the slot limit. In my mind he had won his freedom that day by dragging me clear across the marsh; a moment I will cherish.

The rest of the day played out slowly as we paddled around the back bays of the tidal marsh. I caught two small stripers and my son Jacob was able to connect with his first speckled trout and two more puppy drum. As we paddled back to the ramp I thought about my previous fishing struggles. You simply can’t beat a good knowledgeable guide who has the experience to put you on the fish. 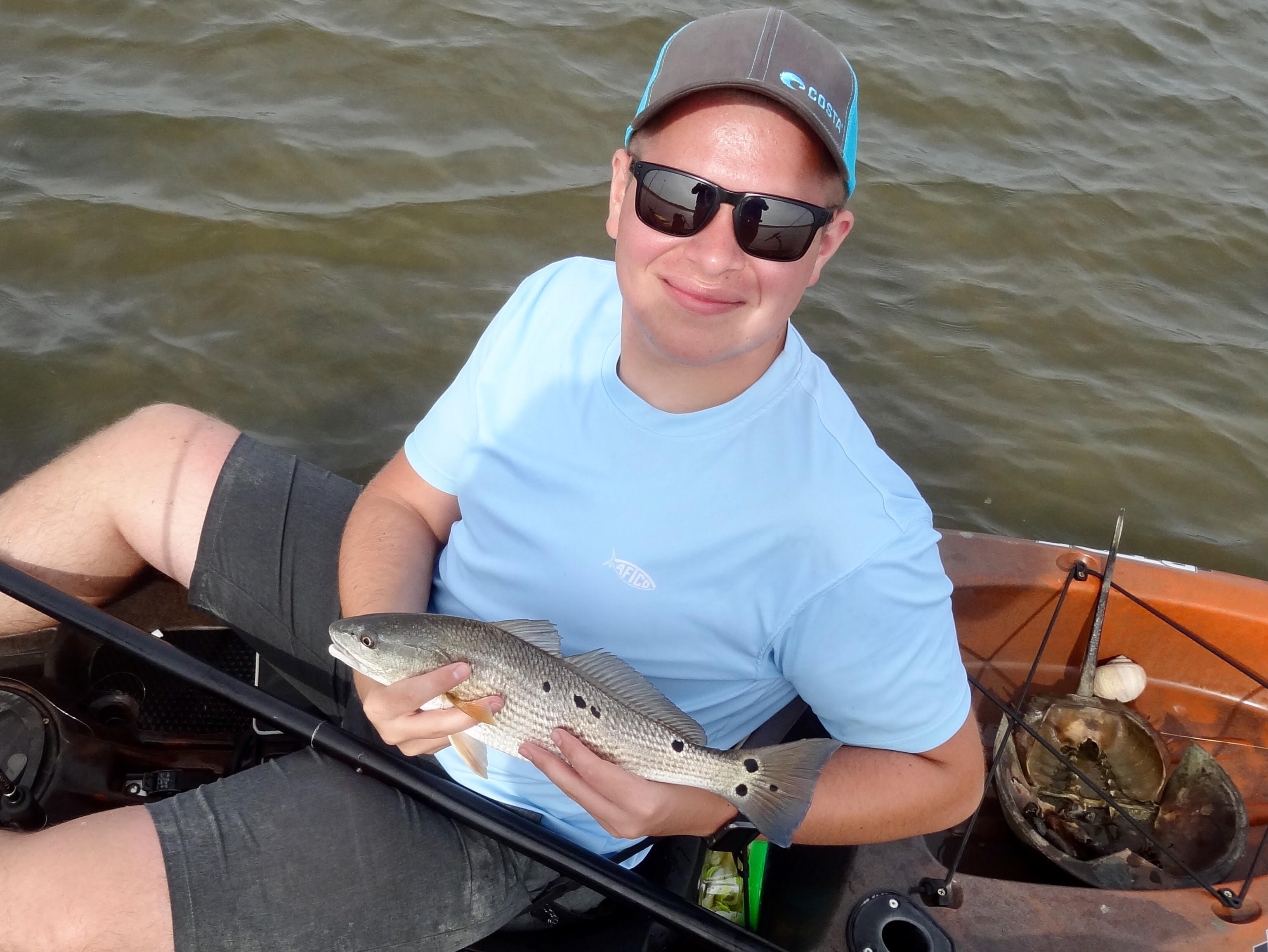 I look forward to next year’s adventure in the Outer Banks whether it’s kayak fishing in open ocean or fishing inshore. This year’s success has rekindled the spark within me to create another OBX adventure. If you want to create your own Outer Banks adventure, Fin & Field has done all the research. Check out our Outer Banks destination page that is filled with the top guides and captains who are sure to make your next vacation an adventure of a lifetime! 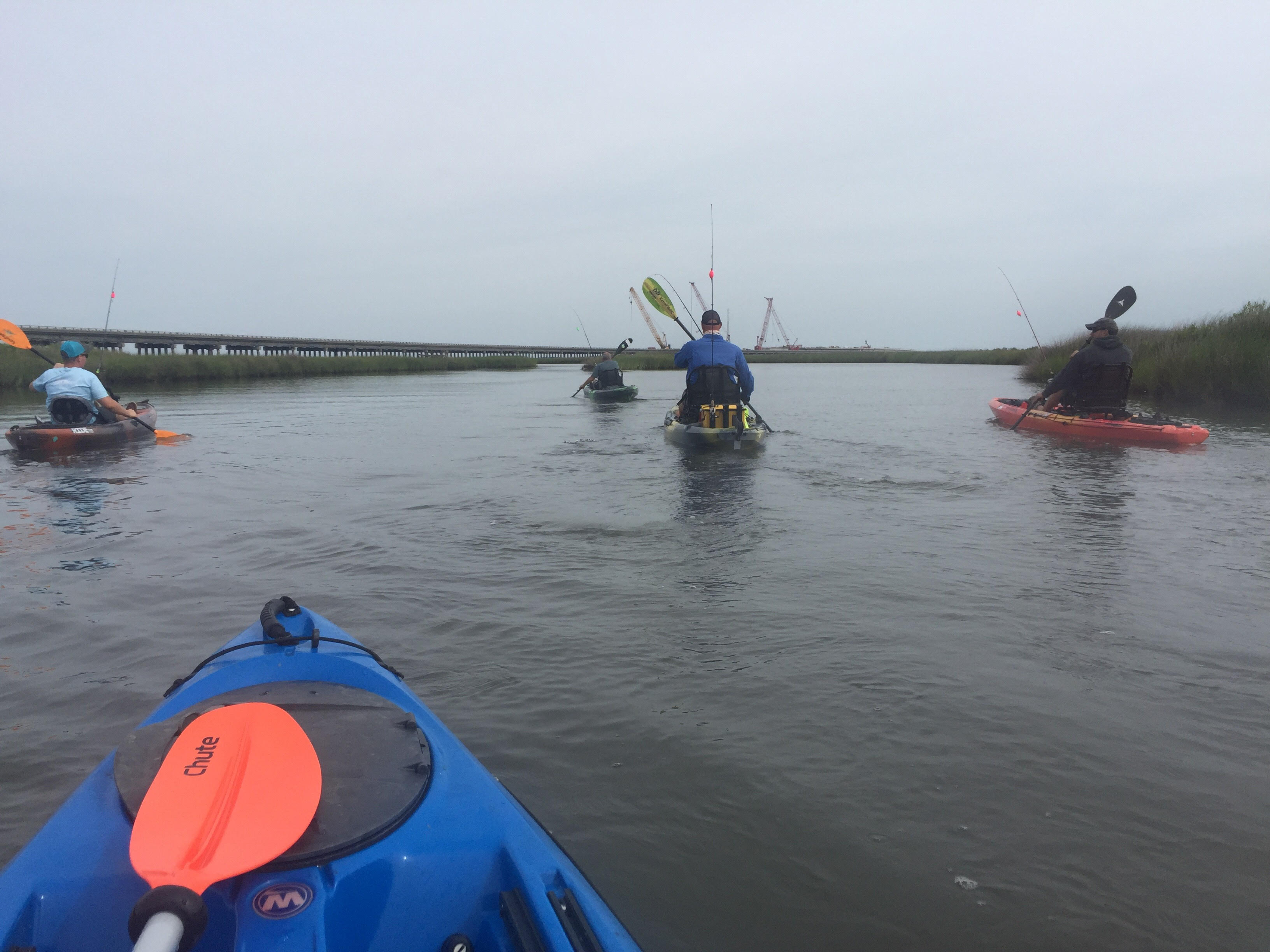 Written By
Staff Writer
More from Staff Writer
The VHF-antenna ratchet mounts on my boat tend to rattle loose, so...
Read More