Fin & Field’s Most Interesting Sportsman in the World (MISITW), NASCAR Driver Ty Dillon, recently visited the Dover International Raceway for the AAA 400 Drive for Autism! Dover is the mid way point for the 2017 Monster Energy NASCAR series so Fin & Field decided to go cheer on Ty and experience the sights & sounds of race day.

It was a big week for the Dillon family. Ty’s brother Austin was fresh off putting the famed #3 in victory lane for the 1st time in over 16 years while notching his 1st career cup victory in Charlotte. Ty was hoping to double down with another Dillon victory!

Race day is an all-ages event that starts well before the drop of the green flag. The Fin & Field team started our day at 6:00 am with a tailgate breakfast. When the gates opened at 7:30 am we went straight to the garage. We found it already alive with activity. The garage almost overwhelms the senses with the roar of 800 horsepower engines, the smell of Sunoco E15 fuel, the sight of engineers with laptops analyzing data, and countless crew members rushing one direction or another. 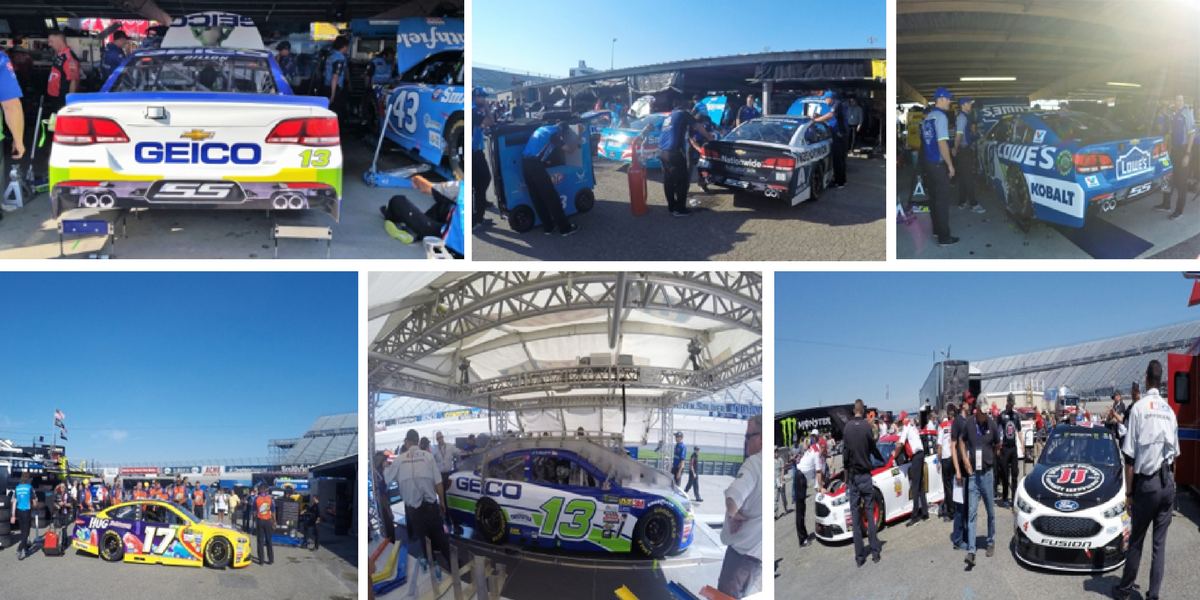 We walked the 1000’+ front straight to get the experience of being on the track. Then we jumped over the wall and walked the 1,500’+ pit road and saw each of the 43 stalls. We admired each teams pit box and setup. That was when I had the good fortune to be invited on a Toyota lap around the track! Zipping down the back stretch and barreling into the turns at 80 mph in a Toyota Highlander SUV takes your breath away. It was absolutely awesome but I had to force myself to remember we were crawling along compared to the NASCAR drivers who would be going nearly 100mph faster!

After the lap around the track, the Fin & Field team had a surprise meeting with Michael Waltrip from Fox Sports in front of the #13 pit. The Waltrip brothers did separate pre-race pieces on Ty and the #13 crew. Michael Waltrip did a live interview from pit road with the #13 crew and Daryl Waltrip did a segment on Ty being named the MISITW. Spoiler: He agreed that Fin & Field got it right when we chose Ty Dillon!

Next we visited the #13 Germain Racing hauler to say “hello” and “good luck” to Ty. It was amazing to see the organization and the amount of gear inside. Once again Ty impressed the Fin & Field team with his easy going attitude, genuine nature, and professional composure. Despite a busy race day schedule full of media appearances, crew meetings, and other obligations, Ty gave everyone gathered in the pit his attention and time.

For a NASCAR fan, spending the pre-race in the pits is surreal. We walked past driver Jamie McMurray (#1 McDonalds), team owner Jack Roush of Roush Fenway Racing, Roush Fenway Racing drivers Rick Steinhouse Jr. (#17 Fastenal) and Trevor Bayne (#6 Avocare), we saw Trevor Bayne greet and talk to fans outside his hauler, we watched Jimmy Johnson’s crew chief Chad Knaus going over the #48 Lowe’s Chevy, and finally we stopped by Dale Earnhardt Jr.’s #88 car and I couldn’t resist getting some photos! The closer it gets to race time, the more you need to have your head on swivel. Race cars are pushed in and out of stalls for tech inspections, pit crews are rushing around with carts full of tires, and teams are lining up to fill dump cans with Sunoco fuel. Getting fuel is a surprisingly strict process and only a few people are allowed to handle it! The best description of the pits is organized chaos, and fans get to be right in the middle of it all.

Car after car paraded out of the garages until pit road was full. The cars made a spectacular backdrop for the service men and women of the Dover Air Force Base Color Guard who were presenting American flags. If that wasn’t enough, A-10 Warthogs from the 104th Fighter Squadron of the Maryland National Guard performed a dramatic fly-over. And finally, Chef Gordon Ramsey was the Grand Marshall and yelled “start your engines!” 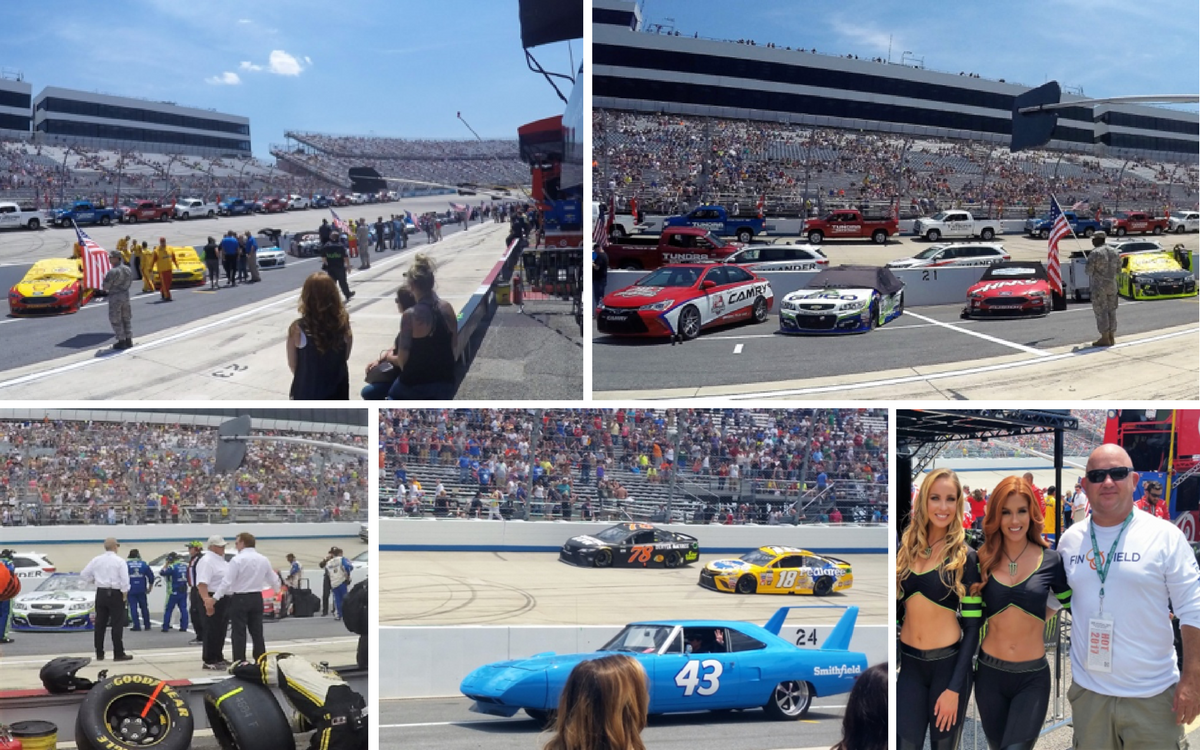 Another NASCAR tradition is the introduction of the drivers, and the resulting cheers and jeers from the audience for their favorite drivers. Unsurprisingly Dale Earnhardt Jr. got the loudest cheers. The 39 car field was split into two groups for a series of parade laps. MISITW Ty was starting in the 21st for this race.

When the green flag dropped, the roar was deafening. Nearly 100,000 fans cheering and 39 cars roaring by at full throttle creates one hell of a rumble. The noise is so loud you can’t hear each other talk and fans end up developing hand signals for everything. The race was pretty smooth, Kyle Busch lead the race for 18 laps until a pit stop problem left the his #18 car without a left rear tire, much to the crowds delight! Every fan needs to experience pit stops up close! Having been to a number of races, I am still amazed at how crazy the 13 second pit stops are. At this race I watched the first round of pit stops from the #17 pit stall. Air guns sing, tires bounce over the wall, lug nuts fly everywhere, dump cans add 12 gallons of fuel at a time, and then the cars leave the pits while burning rubber.

The day continued with the natural ebb and flow of a NASCAR race as all 39 drivers fought to be the first car to complete 400 laps. Martin Truex Jr. in the #78 car won stages 1 and 2. 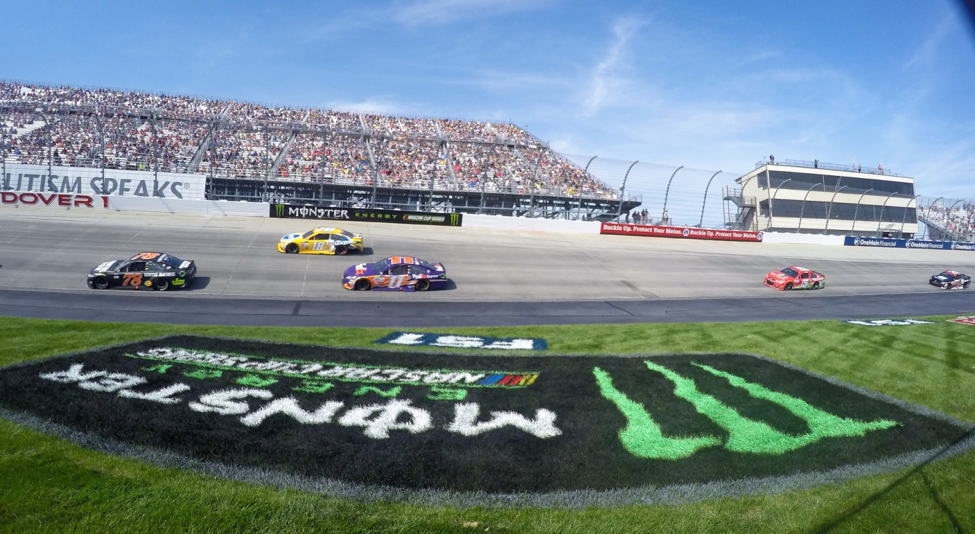 On lap #334 the Fin & Field team celebrated as the #13 car took the lead! There was a surreal sense of awe and adrenaline as our guy Ty– the MISITW – was flying around the track in the lead with #42 Kyle Larson, #48 Jimmy Johnson, #31 Ryan Newman, #78 Martin Truex Jr., #88 Dale Earnhardt Jr., and #3 Austin Dillon trailing close behind.

As the laps wound down and Ty held the lead we let ourselves get excited about the possibility of watching Ty win his 1st cup race. Ty lead 27 laps and was still in the lead with about 20 laps to go when #42 Kyle Larson passed him. Kyle lead the race until a late caution set up an exciting finish. The Monster Mile did not disappoint the fans who hoped the race would come down to the wire, the race went into overtime! Ty was in 4th after the caution and was still hoping to take 1st. Wreckers or checkers as they say, Ty was racing for the win when he got bumped coming out of turn 2. The resulting wreck ended the race for many cars and ruined Ty’s chance to win the race. After a review, it was determined that Jimmy Johnson had made it back to the overtime zone and was declared the winner. Ty limped across the finish line in 14th place finish after leading the race for 27 laps. It was great to see the rookie out in front of Ryan Newman, Jimmy Johnson, Kyle Larson, and Dale Earnhardt Jr!

We watched the winning #48 slowly roll up pit road. Jimmy made one last right hand turn into victory lane and a large crowd of fans and crew greeted him. He climbed out of the car and up onto the winners bleachers to celebrate with Team Owner Rick Hendrick, Chad Knaus & the rest of his crew, Monster Energy girls, and many fans.

We watched some post-race interviews and then headed back to the garage. The garage comes back to life after the race is over. Some cars are loaded up quickly while other require some repairs before going back in the haulers. 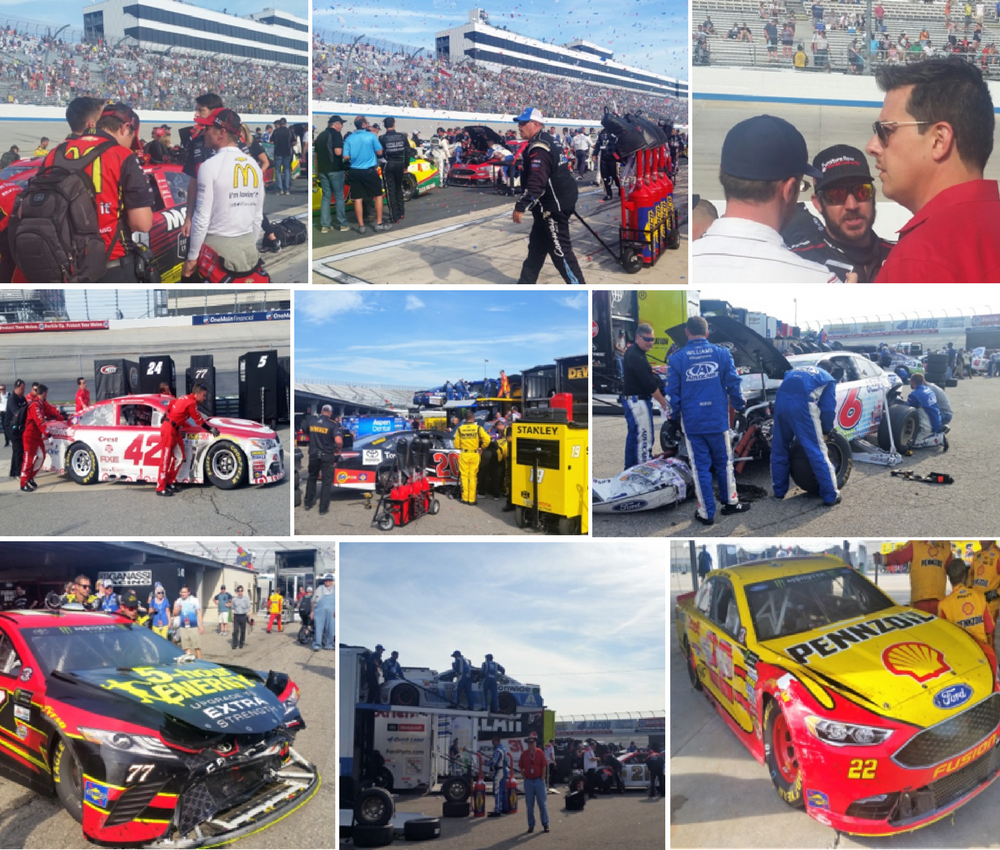 By the time we finally left the track, the bleachers, pit road, and the pit boxes were all empty. The unbelievable noise had subsided to nearly nothing. It was hard to believe that barely an hour had passed since the end of the race. The drivers and pit crews were already gone. They had begun their journey to the next race and the fans were not even home yet.

One side note: One of the best things we saw all day was the Monster Energy Crew pulling two servicemen into their pit and giving them front row seats to all the action. Bravo Monster Energy! 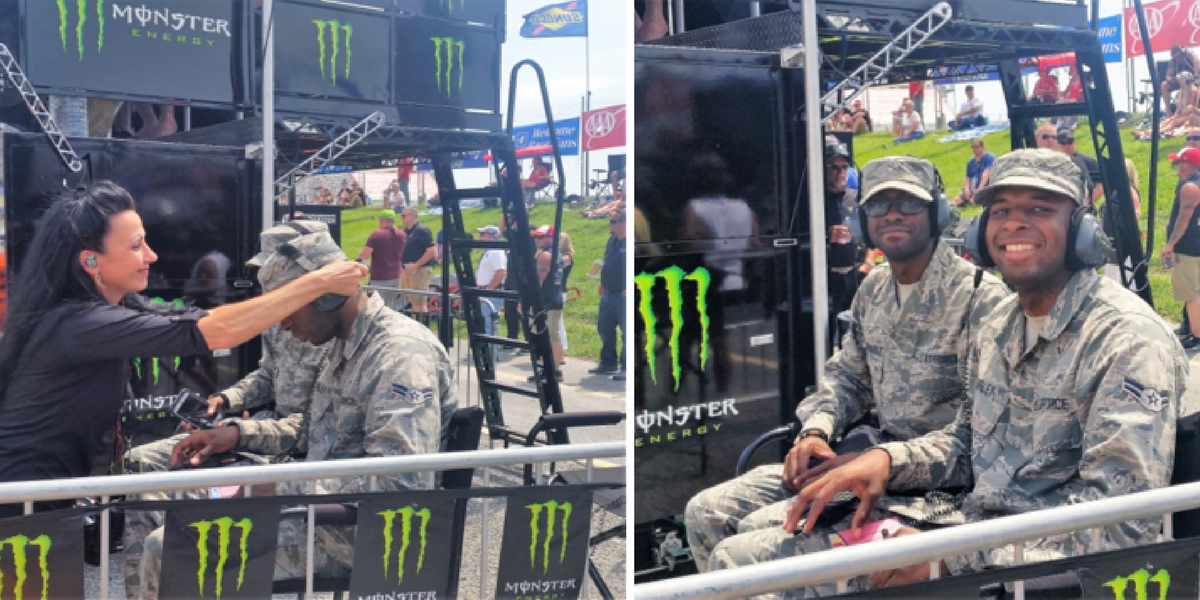 Written By
Staff Writer
More from Staff Writer
Thompson said it was different with Hartman, who is seven years older...
Read More

0 replies on “A Day at the Monster Mile with Ty Dillon!”