One of my all-time favorite fish to eat is dolphin. When I say this to non-anglers they cringe thinking I mean porpoise. After a few awkward seconds I chuckle and explain that they might know dolphin by other names like mahi mahi or dorado. Suddenly they recognize that not only have they heard of mahi mahi but they too share a love for how great it tastes.

Mahi mahi can be found all over the world in both tropical and sub-tropical waters. Not only are they excellent table-fare but they are one of the most attractive game fish in the ocean and put up one heck of a fight. Thanks to research done by the University of Miami we also know that mahi mahi can grow exceptionally fast. One captive bull put on a whopping 50 lbs in 9 months! Not only do they grow fast but they reach breeding age by four or five months old. Both of these factors combine to mean there are plenty of eating size mahi mahi all over the world, we just have to find the right places to catch them for ourselves! 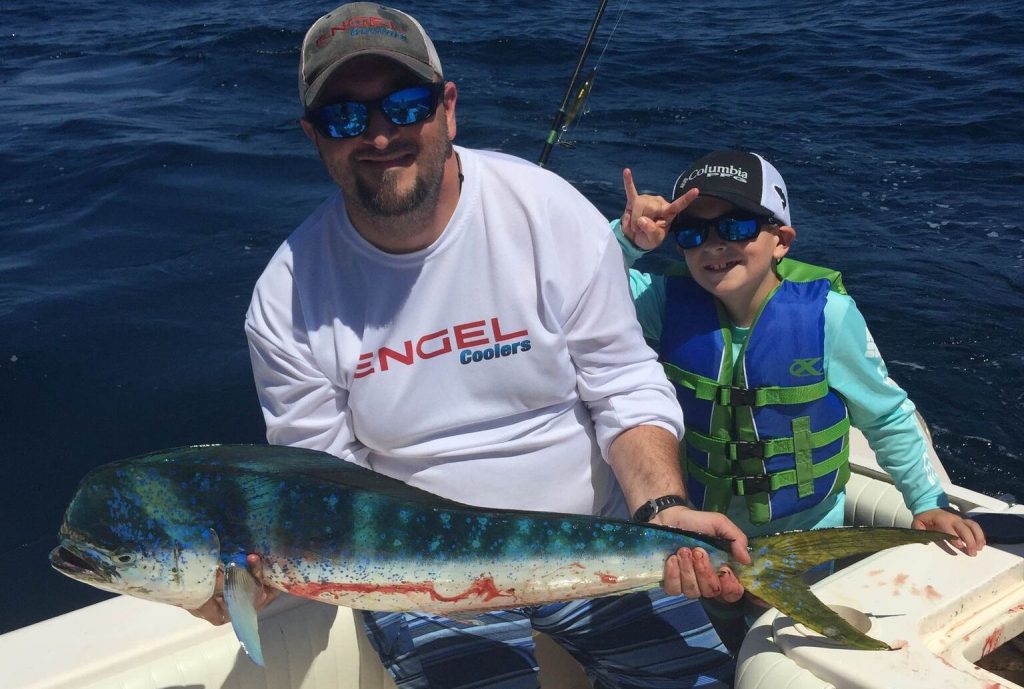 Up until last year I had pretty much written mahi mahi off my bucket list of fish I wanted to catch. Even though they can be found all over the place, I assumed that a very expensive fishing trip was required to find them. Often times mahi mahi are caught while fishing for other game fish like tuna, marlin or wahoo. But my luck changed about ten months ago when I was scrolling through Facebook and came upon a video from one of my favorite magazines, Field & Stream. 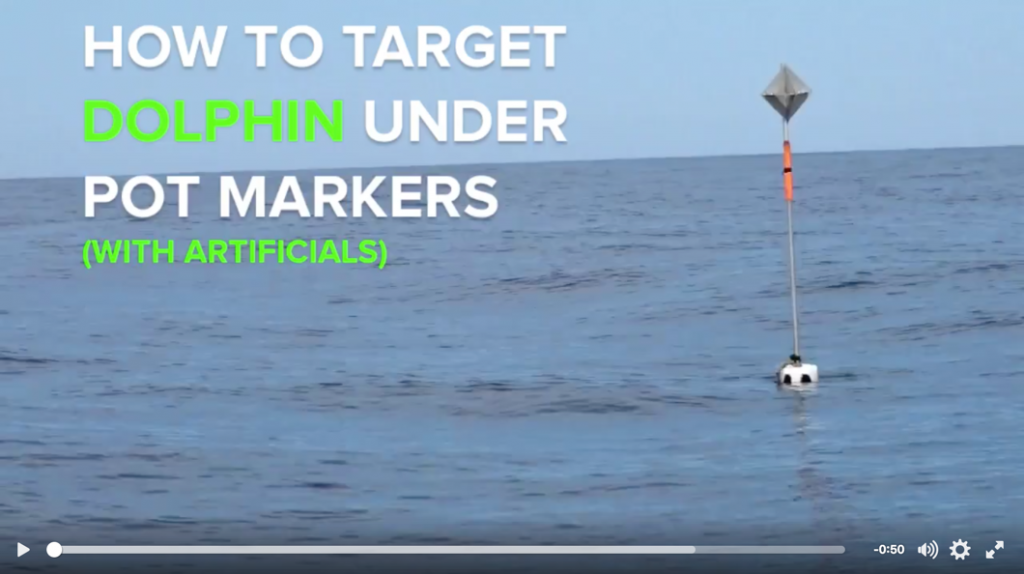 In the video the two stars, Joe Cermele and Captain Eric Kerber of Field & Stream’s video series Hook Shots, were not only catching mahi but they were actually targeting them. They were drifting past lobster pot buoys and catching them left and right. I was already a huge fan of the show but hadn’t realized that the possibility of targeting mahi mahi was well within my reach. My mind reeled with the possibilities.

So I did what any normal fan-boy would do; I decided to reach out to Captain Eric to get the skinny on his mahi trips. Turns out in his spare time from playing host to the Hard Core Tackle segment of Hook Shots he runs a charter, out of Belmar, New Jersey. Yes, you read that right Captain Eric Kerber is fishing for mahi off the coast of New Jersey. Not Florida, not California, but good ole New Jersey. Belmar is a couple of hours drive from my house. I booked his next open Sunday slot and had restless nights dreaming of mahi mahi for the next few weeks. I love it when a plan comes together. 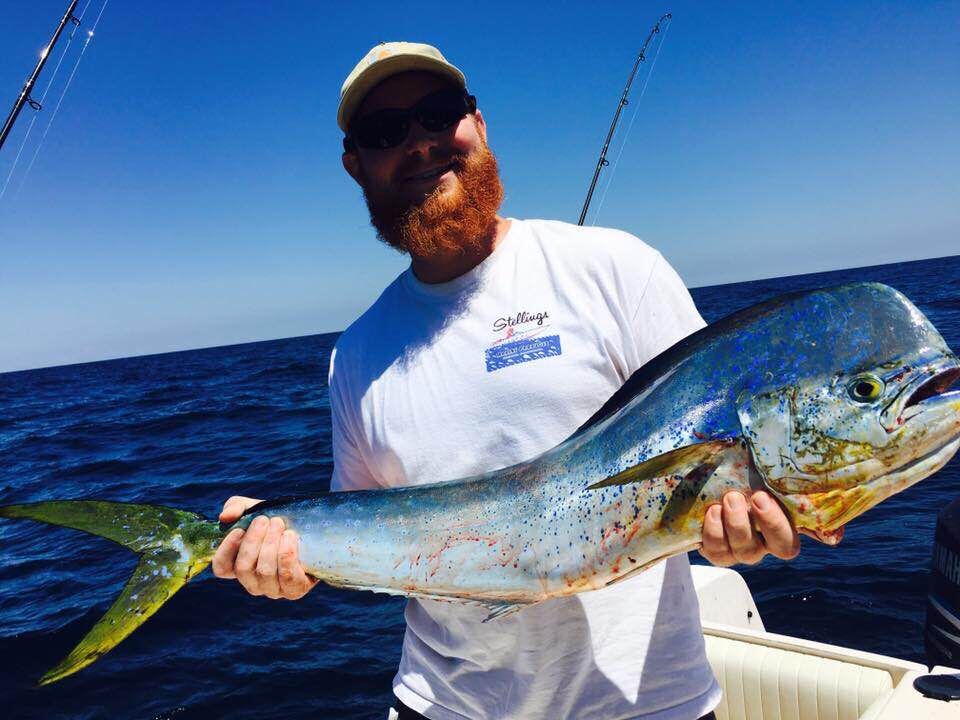 My son, nephews and I met up with Captain Eric at the dock, went over a brief safety check and proceeded to head out for open water. Before we got outside of cellphone range he suggested that all of us text our wives to let them know what we were doing, that we wouldn’t be back until dark and not to worry. I sent my wife a brief text; we all chuckled and turned our phones on airplane mode as we set out for the cobalt blue water of the Atlantic.

The ride out in his 23ft Grady White wasn’t too bad, despite the waves. At about 15 miles out we began to check on the lobster pots for signs of fish. Unfortunately the ocean was still a dirty sea foam green with no visibility. We threw a few casts just to reassure ourselves there weren’t any fish around and off to the next few pots we went. We did this for a while and then decided to just make a beeline for the blue water. At around 30 or so miles out we found what we were looking for; the crystal clear cobalt blue water of the Atlantic. Now all we needed to do was find the mahi mahi. 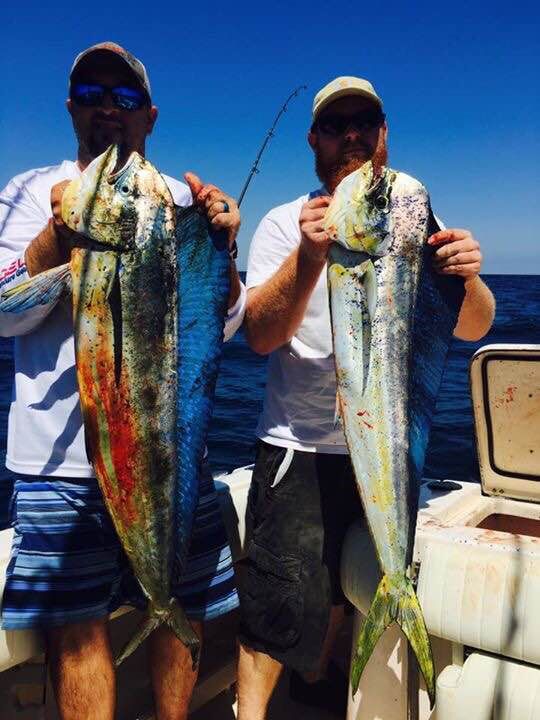 It took us a while but we came up to a pot about halfway through the set and struck dorado (gold), literally. We all started to cast out towards the pot and quickly retrieve our stickbaits and poppers. Captain Eric was the first to hook up and handed the rod to my 10 yr old son, Ryley. The chaos was about to begin. I frantically tried to reel in my line to help Ryley hold his rod tip up to fight the big bull on the end of his line. But I didn’t realize at the time that when the first mahi gets hooked you usually end up hooking a few more as they school around their hooked brother. That’s just what happened. Now we had two fish on at the same time. One of my nephews, Ryan, stepped in to help Ryley while I fought my fish. Within a minute my other nephew, Corey, was hooked up. We had a triple hookup and the ensuing chaos had us trying to keep our lines untangle from each other as well as from the prop. My nephew managed to boat his mahi first, followed shortly by my fish, but Ryley’s bull just wouldn’t give up that easily. After a few more minutes we were finally able to gaff him and put him in the box. Mission accomplished. We had succeeded in catching what we had come over 45 miles across the ocean in search of. But the fun wasn’t over just yet.

We went around checking the rest of the pots and had a few follows and hits but we just couldn’t seem to find any more mahi mahi that wanted to play with us. Ryan did end up convincing a jack to take some fresh cut bait and finally everyone on the boat had caught a fish. At that point we were pretty much out of pots to hop. This is usually the point where you head back to port calling it a successful fishing trip. But Captain Eric had something else up his sleeve. He presented us a choice, go back or throw out the trolling gear he just “happened” to bring along and we could troll for some tuna. We trolled.

By the end of the night we came back with three large mahi mahi, one peanut mahi, an almaco jack and a skipjack tuna. Not a bad days catch for anyone, let alone off the coast of New Jersey. We also came back to our cell phones ringing off the hook. Ryan’s wife almost called the Coast Guard to go search for us. Turns out not everyone took the Captain’s advice. Luckily my wife had managed to convince everyone that all was ok. Lesson learned; always let your loved ones know where you are going and when you should return.

Never in a million years did I dream that I could find a charter boat close to home that would take me out for mahi and tuna. Are you looking to book an insane mahi mahi adventure too? Head on over to Fin & Field where we have the world’s best captains waiting to take you out.